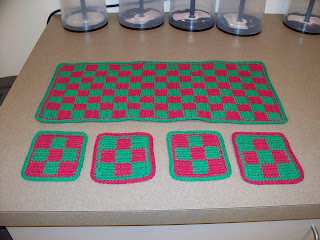 Hey there! Gee, it seems like forever that I've posted. Time seems to slip away from you when you're busy in your life. And I've been pretty busy. At least trying to keep busy to keep my mind occupied. August was a really bad month for me and September started out bad too.

I lost my dad in August, then lost my aunt and cousin at the beginning of September on the same day. Not together though. He was in FL and his heart gave out on him, and she was in CO and age gave out on her. She was my dad's sister. My cousin was my uncles' (my dad and aunts' brother) son. That basically leaves my uncle with no immediate family. I feel really bad for him.

I am so ready for this year to end.

Sooo....on that note, I just finished up with a swap. Shown is what I made (a microwave runner and coasters)and I was so enamoured with the finished product that I have started another one in maroon and a pastel pinky/orangey color for my daughter. The color combination is awesome! But then again so is the green and red that I did for Paula.

This particular 'stitch' pattern is in the Interweave Press book of 250 stitches. It's called 'basic patchwork'. It took me a while to get the hang of it. As a matter of fact I had the first one halfway done when it finally clicked in my brain and I pulled the whole thing apart and started over. Which was a little daunting because you're working with two colors of yarn so then you pull one color apart for 5 stitches then you come to the other color for 5 stitches and so on. The yarns get very tangled up. And they tangle while you're crocheting too. I had to stop at the end of every row and detangle the balls. Working with two strands, holding one while working with the other is not an easy task if you've never done it before. But it was worth it in the end. I love the finished product!!

I have gotten this 'hat bug'. I want to make hats. A lot of the patterns I've looked at and tried are mostly for 21" heads. So I'm thinking that I need to go up a hook size or two to come up with the right gauge for a 23" head (mine). (I know...I have a big head..lol) I've even used the right hook but added a row or two. They always end up bigger than the 23" then I have to decrease and add rows to make them fit. What's up with that? And if I don't know someone's head size....how do I know how big to make them so they fit? Does anyone know of a universal pattern that I can make that will fit almost any size head?

I'm asking for a couple of reasons: 1)I want to be able to make hats for presents and 2)I want to make hats to give as door prizes for our runs. If I had a quick crochet hat that would fit almost anyone that would be wonderful!

And I think fall is FINALLY here. After that front went through yesterday it's supposed to be in the 50's at night and high 70's during the day. To me that's the perfect weather. But somehow I don't think it'll last too long before the COLD sets in. I guess we'll see.

I hope your corner of the world is full of love and laughter today.
TTFN
Kat
xoxox
Posted by Chain Stitch Crochet at 11:20 AM