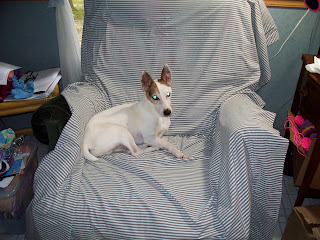 I am having a hard time with the blahs. The month of August was the pits, starting with dad leaving us. I lost another friend, two of my friends lost their parents (one lost her mom the other lost his dad) right behind me losing my dad.

AND THEN I get home from work on Tuesday and in the mailbox when I open it, is this big envelope. I see it's from a friend of mine who has had/is having a really rough life. I had sent her one of my heart shell motifs a few months back hoping to put a smile on her face. Well, she returned it.

On the outside of the envelope were a few written things and one of them said 'This is my way of saying GOODBYE'. I thought...what the heck??? So I open it up and inside was the motif with a letter written on the backside of my letter to her. And she explains that maybe someone else can better use it and at the bottom it says again that this is her goodbye. I am freaking at this point.

So I go in the house and grab the phone, looking for her number on the caller ID. I call it. I get a message saying it's no longer in service. Now I am in panic mode. I don't know what to do! I am so frantic that I can't remember anything - what her sister's last name is, her brother's first name, her other friends last name. NOTHING! By this point all I want to do is get in the car and head south 370 miles.

Then it hits me - my sister lives in the same community as my friend and she's only a mile or so from her!! So I call my sister up and ask if she can go check on my friend. She says she can so I give her directions to the house from her house. She says give her 10 minutes or so and she'll give me a call when she gets there. Huge sigh of relief.......somewhat.

The call comes....no answer at the door. All curtains are closed. She goes to the neighbor next door and the neighbor is certain she saw the mailbox flag up the day before and a light on the night before. I'm freaking again. What to do? Does my sister need to call the cops? No...need to get ahold of a relative first. The neighbor next door was the 3rd cousin to the other friend that I couldn't think of her last name. Go figure huh?? Small world. So she's going to call her and in the meantime I will do some digging to come up with a relative's name so I can hunt down a number.

Now mind you....my friend's relatives are not on very good terms with her except for one that I am aware of. This other 'friend' has been described by my friend to me as 'taking advantage' of her. (My friend has several severe medical problems and has to use a walker to walk - obviously she does not work - she's basically sitting in her home waiting to die. This is my observation of when I last saw her at Christmas) Anyway I get online and I start searching obits in the area (hoping to not see hers), anything to try and remember names. FINALLY.....

I remember her brother and sister-in-law in Gainesville. So I look online at the white pages. VOILA!!!

After another hour of STUFF........and to make a very long story shorter than I want to type today.....I finally get her on the phone. She's alive and I am in tears.

I have had so much grief this past month that could last me the rest of my lifetime. I am so wiped out by it all. Thankfully I have my Mr. Lick Lick to talk to and hug and love on. I don't know what I would do without him.

Since the beginning of August I have been pondering life. All aspects of life. Why we are here, the cycles we go through in life, the end stages of life, death, where we go when we die, why we can't talk to those who have left us. I have examined it all and keep examining it. Thinking death is a daily thing for me now and I'm literally sick to death of death.

I never really thought about it too much except for those I've lost to death through the years, and mostly because it was in my far-off future....right?? Not to the extent that this last month has brought death to the forefront of my being. It's getting more and more frequent. And now I am fearing death. I don't want to die, I am selfish. I want to stay here forever. I don't want to leave my loved ones. How crazy is this.....I have been trying to finish up all of my unfinished crochet WIP's so that if something happens to me they're done. I know it's not really that crazy but it's crazy to the point that it's making me crazy. I have been crocheting at least. I guess that's a plus.

I won't go into the religious aspect of life and death....my views on religion, as I know it, are another very long post.

I haven't been able to post because death is on my mind constantly and it's consuming me and I have just been eaten up with the blah's. And nevermind that the 2 year anniversary of my best friend's death is Monday.

I keep thinking and hoping for some respite. I wish I had a switch in the back of head that I could just turn off my brain sometimes so I wouldn't have to think.

Hope I haven't brought you down. I also hope very much for you that life in your corner of the world is very bright and wonderful!!!

PS/Love my little fellow up above....he's my whole world.
Posted by Chain Stitch Crochet at 1:22 PM