I don’t know if you heard or not but we had a tropical storm off our coast this weekend!! Can you believe it? Already. It hung off of the coast all day yesterday and today it’s going to be zinging up the east coast. At my house I had some winds but no rain. I went into Rincon to Wally World early and it was raining there. That’s only about 12 miles from my place. And weird too…when I left to go to Wally World it was clear and sun shiny behind me – maybe not even a mile up the road, and it was ominous and dark black clouds in front of me. Alberto was a small one but if that is a sign of things to come this summer I hate to see it. It’s no doubt with all of the weird weather our country has been experiencing. I just hope no life is lost due to a hurricane this summer and none of them hit land.

So….I was sitting out on the front porch yesterday enjoying the still-spring-like day. And got this awesome pic of one of my hummingbirds. It’s a tad blurry from trying to get as close a shot as I could but it turned out pretty good I think. Best pic of a hummingbird I’ve ever taken! I was hoping some birds would come and visit my birdbath but Mr. Mouth was out there roaming the confines of the compound.

I got all of my flags done, with the exception of the hearts and a way to attach them to the trees. I think I want to do ties so that the flags can hang down, like they would if they were on a horizontal pole. But I was thinking that if I do that then I need to make the hearts sit so that they are right side up, instead of laying on their side. I’ve got a couple of days to finish them. I have two hearts done, they only take about 10 minutes to make. 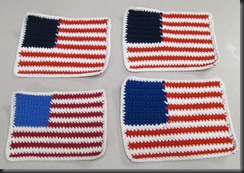 I used different cotton yarns and different hooks, that’s why the difference in size. I also ran out of dark blue so I had to use some RHSS on one and although I didn’t like it real well, mixing the two yarns, I had to do it to finish them. The last two were made while watching Harry Potter movies. They had a marathon of Harry Potter on the ABC Family channel this weekend. 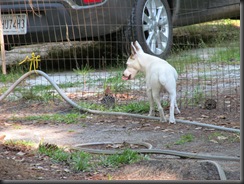 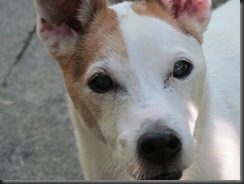 Two pics of my boy. Check out his tongue in the first one. It’s almost like it’s bent! And I love this close-up of him. He has his little head cocked at me. I took a bunch of pics of him yesterday. A lot were blurry because he was moving but I did get some good ones.

I hope your Monday is a nice one! Cya soon!

Posted by Chain Stitch Crochet at 7:54 AM