Hey y'all. Sorry that I have been a tad absent. It's that life thing again. Usually a bunch of life piles up and you have to take care of it before it gets too heaped up on ya.

So I told you about a friend of mine passing. He was a very popular guy. The service yielded over 400  people, standing room only. Below is a pic of him and I taken about 4 years ago. That was when I looked good. lol. It was one of the better pics of him too before he got really sick. His passing was very quick and a blessing. Who wants to suffer a slow, agonizing death? I know I don't. I hope I go as quick as he did so that I won't even know it. He will certainly be missed by a lot of people. He was a decorated Vietnam veteran and proudly displayed it. As he should. 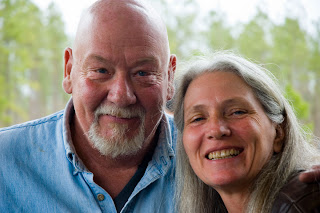 Before I get to my crochet I want to show you a blurry pic of my Leo. Bless his heart, he's still sliding downhill. A week or so ago he was given a treat and his usual thing is to run with it and jump up on my bed and devour it. Well, as usual he did but he didn't quite make it up on the bed, hit the side of my bed and was slammed against the wall and landed on the floor. I cried. I felt so bad for him. He's started having trouble jumping up in my chair. I know what I need to do. I can't. Call me selfish, and I know it. I just can't let him go yet. 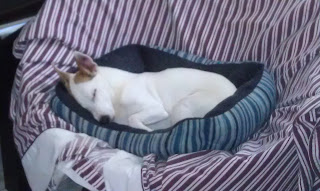 So I have been doing a little bit of crochet. But I realized earlier that I haven't photo'd much of it. Oh well. It's not the end of the world. 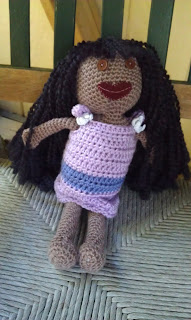 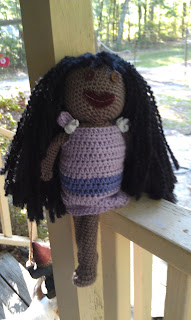 This is Brandy. I made her for a co-worker's daughter for her birthday next month. I neglected to get pics of her two hats and coat that I made for her. She went to Whitney's mama yesterday to be wrapped up. 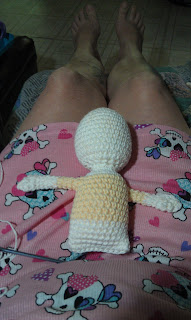 And this is the birth of Rosey Dawn. Actually I finished and attached her legs last night. She is going really quick. And I already have another doll promised to a girl who grew up with my son, she wants one for her daughter. (Don't you like my jammies?) :o) 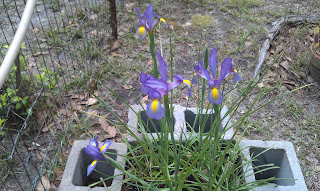 And lastly today is a pic of my iris. I didn't think they would bloom this year but they surprised me. Believe it or not there are 46 bulbs in that little makeshift planter. I had to get them put into dirt and this was all I could find to make a planter for them. I will have to separate them come winter to replant.

I hope your day was filled with life, love and laughter. Cya soon!