I realized not long ago that a lot of my posts show UFO’s, not FO’s. So I thought I would show some FO’s with one UFO in the mix. :o) 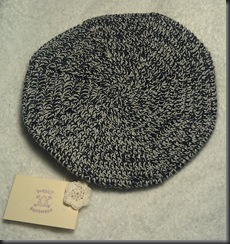 This is the top of the beret in my last post. It’s ready to go, along with the others, to be donated. 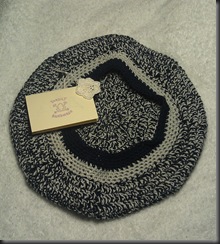 This is the band on it.

I hand made my cards. A while back when I was in Hobby Lobby I came across some stamps that I loved. So I bought some heavy paper and cut it up into sizeable pieces. I stamp my stamps, make a cute little flower to attach and put my care instructions handwritten inside. 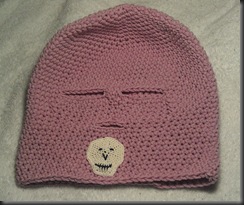 I had quite a range of comments when I posted this pink full face hat on FB. In my mind I envisioned something totally different than what came off the hook. Oh well………it’ll keep someone (female), who rides a motorcycle in winter, warm. 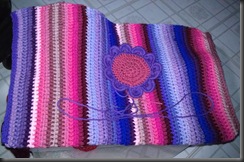 This is my UFO. I had started this as something totally different, a pillow cover for a pillow for Kylie, and trashed the idea and put it away (because it didn’t work out like I planned). A week or so ago it came to me that I had this in my bin and I could use it to make a book bag and fill it with books for her birthday (instead of the stupid pillow idea). She loves to read and I think that’s a better idea anyways. :o)  So I crocheted both ends up. And it was interesting the way I did it.  I made a sc, ch 1 all the way along and then when I got to the end I came back up with sc on each side post of the sc’s. Then when I got to the top I chained 2 and came back down the other side repeating the sc on each side post and fastened off at the end. I should have taken a pic, darn it. The way I did it reinforces the seams. This is a rather large book bag. I wanted it to be strong enough to carry the load that she would put in it.  Like my flower for the side? I got the pattern for it from Crochet Garden by Suzann Thompson.  I have to tell you that this is the second flower I’ve made from this pattern and I’ve changed the inside of the flower both times. BUT I had the same number of stitches required before starting the petals of the flower. Do you know that both times I ended up with 11 petals instead of 10??  I don’t know how I did it but I did. It’s a pretty cool looking flower too.   Also I bought a couple of straps for this bag from Jo-Ann’s but now I am thinking I won’t use them. The only reason being that I want her to be able to wash this and I don’t think the straps are washable. :o(  So it looks like I will have to come up with something else.

Hey…….it’s hump day!  I hope you are able to get over the hump with relative ease to the downhill slide to the end of the week. Cya soon!

Posted by Chain Stitch Crochet at 8:45 AM