Kat On A Tin Roof

Haha……….yes the title is correct. I, the dumbo that I can be sometimes, got up on my roof this weekend. Believe me, I paid for it and am still paying for it. I actually did a lot of work outside this weekend and between my back, hips, legs and arms, I don’t know what hurts worse.  But I digress……….back to the roof.  Since I moved here I have not cleaned the roof off except to get up on the back of the bench closest to the house (I have a bench that goes around the whole back deck, with the exception of the stairway down, and the bench has a back ledge about 6 inches wide) and with my rake, rake off what I could reach. I am surrounded by pines, oaks and sweet gums. The majority over the house is pine and oak. So I had a large build up of pine straw, oak leaves and acorns. We are talking 13 years almost.  The last 3 times it’s rained I have had water leaking on my front porch right in front of the door. And that is due to the fact of the buildup of pine straw, acorns and leaves and it was backing up under the flashing. I had to do something. And I’m too proud, stupid, whatever you want to call it, to call on one of my guy friends to come do it for me. I hate asking for help.

So, here I am, up on the roof. I got up there real easy. Just put the 10 foot ladder on the back deck up to the roof and climb up. The tricky part for me was getting down. Yea………….    And I couldn’t even trim up all the trees over the roof because every time I tried to get close to the edge enough, my head and my stomach would start doing whoopdeedoo’s and my legs would turn to jello. AND to top it off I had the wrong shoes on to do the job. The tennis shoes I put on, to do yard work in, were slippery on the roof. Early on I took them off and tossed them down to the back deck so that I wouldn’t slip and fall. (Oh, and I did have my cell phone in my back pocket) I am also paying dearly for that too. Even though I sprayed myself all over before starting yard work on Saturday, I am covered in chiggers. :o( For those of you who do not live in the south and don’t know what chiggers are, consider yourself lucky.  They are little microscopic bugs that make you itch. BAD.  They live in the trees and spanish moss.  I think I was ok on the ground but once I got on the roof is when I think I got them. My ankles are covered, I have them on my legs, I lot on my underwear line on both legs and top, and a couple on my torso. Uh huh. Yea, sux to be me now doesn’t it?

And to top it off I couldn’t get off the roof. I had to call one of my friends’ husband (because she didn’t answer her phone or text messages as she was taking a nap) and plead with him to come get me off the roof.  He laughed, and he came to help me down. And while he was there he got up on the roof and finished off what I could not. Lesson learned. NEVER AGAIN WILL I GET UP ON MY ROOF. Now I’m waiting for it to rain so I can be sure that nothing else is going on up there. I’m pretty sure it was the buildup. It was pretty bad.

My view from almost the peak, looking toward my driveway.

My boy, Sunday after I got done cleaning off the back deck of roof debris.  It was kinda funny, while I was up on the roof he was pacing down on the ground looking for me. I had both doors open to the house and he was constantly on the move. I called to him several times but he couldn’t hear where I was calling from and he couldn’t see me up on the roof. I felt sorry for him. 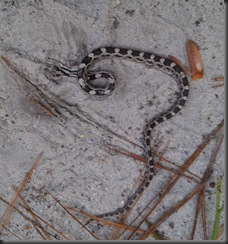 Another snake. Saturday morning when I was just getting started on the yard work I happened to look down and there was this baby snake. It was chilly, 50’s, so he wasn’t moving too much but I had no clue what this snake was. So I smushed it’s head. Come to find out it’s a milk snake, a non poisonous one. How was I to know? I wasn’t taking any chances. Leo can’t see but he likes to smell them, which he did with this one when I was standing on it’s head. Well, he’s a dead milk snake now. I was on the lookout all day for more. I sure hope Leo doesn’t come upon a rattlesnake while I’m at work. They’re looking for food now to hibernate soon.

So I thought this was interesting. See that see-through thingy at the top? A while back, I don’t remember when exactly but it’s been quite a while, I started folding the sleeves from the yarn and putting them in this container. I pulled them out Friday night to throw them out and thought I’d see what all I had. These are a lot of the yarns, not all, that I’ve either finished a project with or started and the sleeve fell off. It looked like a lot more when I was sorting them out but now it doesn’t look like much does it?

So that’s it for me for now. Our weather is awesome right now. Not too hot, not cold. Goldilocks weather.   I hope it comes to you soon, where ever you may be.

Posted by Chain Stitch Crochet at 11:15 AM