Sisters, Puppies and Grilling Out 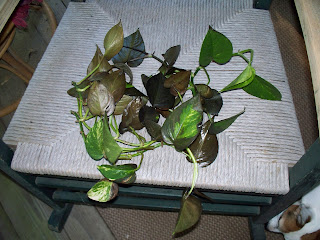 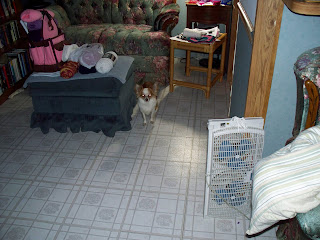 Wow, you would have thought this week would have gone quicker with one less day to work. Nope...for some reason it's dragging. Sigh....

Well, my sister (the one just below me in age) was here for the weekend. She was on her way down to FL to visit with our father, who's health is failing. I fear this will be her last time to see him before he goes. It was a surprise, he didn't know she was coming down. And she was supposed to be taking some home-made banana nut bread that my older sister made and gave her to bring to him. Welll....when I got home from work on Tuesday I spied something unusual in my fridge. SHE FORGOT DAD'S BANANA BREAD!!! I immediately called at our other sister's that she was staying at and asked her did she forget something. She said yea, she guessed that I was going to be the lucky recipient of the banana bread. Poor dad. I told her she better go buy him some, even though it wasn't as good as what was in my fridge. (I've only had one piece so far, but it's definitely the bomb)

So anyways, she brought her little fur baby. Talk about SPOILED! He does not like anyone else but her. Well, that is unless she leaves and goes to the store and he doesn't go with her. We had a very interesting long weekend. He would not let me touch him, would not let Leo within 10 feet of his mama. Poor Leo had a hell of a weekend. I felt bad for him. There were a couple of times that Peanut came after Leo because he thought Leo was too close to his mama. Leo would just keep walking like normal and look at Peanut like he was crazy. I guess he got used to Peanut and his hissy fits. But ya know what? Peanut did let me pet him a few times. Which my sister was surprised because no one else had gotten that close to him. :O) UH HUH....I knew I could do it. I made sure to pet him bunches when she went to the store. He would run through the house whining his little tinny/high pitched whine, then he would come jump on my lap. Ohhhhh.....I forgot to tell you what kind he is.......a long haired chihuahua. He almost looks like a papillion (is that spelled right?). I love little dogs and was thoroughly infatuated with trying to get close to him. Of course Leo was not for this at all! He would bark at me the whole time Peanut was in my lap or when I attempted to pet Peanut.

Peanut would growl at me if he think I got too close to his mama. He is very much his mama's little protector. The only thing is that he doesn't really bite. It's more a knashing of his teeth next to your skin to let you know that he's not a happy little camper. Though I'm sure if it was someone my sister didn't know and he felt/smelled fear from her that he would sink his little choppers.

My sister decided she was going to be the griller for the weekend. I have this little round grill on my front porch that I didn't use at all last year and not much the summer before. And it's too easy too. But anyways, when she went to the store she got charcoal, the kind that has the lighter fluid already soaked onto it.

I thought she was the master of the grill. If I had known how little experience she had with charcoal grills I would have intervened. Well.....it seems that she filled the little grill up with charcoal and then lit it.....right underneath my plants, on my front porch - which by the way is wood. She didn't bother to move my plants and one got totally scorched. I was freakin. So she shut the lid on it. (Shaking my head)

I truly think she has this cloud that follows her. I am a klutz but not near as bad as I was this weekend, and she was the same way! Always hurting ourselves, smashing, stoving, stubbing. I ended up stubbing my little toe on my right foot and it was swelled, black and blue and purple. The black and blue showed up underneath my two toes next to my little toe. Do you know that beds don't move? Why is that? LOL. Talk about hurt. I really hit it hard.

Well she's in FL right now. She'll stop back by one night on her way home to NY, so Leo will only have to contend with Peanut one night. And we will go out to eat or I will bring some home. :o)