My, it was a hot one this weekend! I spent most of my weekend inside crocheting. The only time I went out was to walk Leo to the road for the mail on Saturday, water the plants and go to the store yesterday morning.

It doesn't seem like I got a lot accomplished but I guess I did. Friday night and part of Saturday I made some critters, babies, whatever you want to call them. I was inspired by the Charity post for the Uglees I posted on Thursday. I was told this morning that I should make more. They are kind of cute and I had fun making them but was ready to quit by time I got the blue one done. 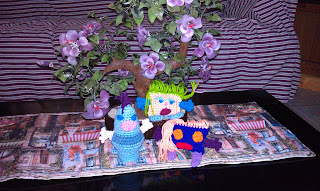 The rest of Saturday I spent putting together the squares I had made for the Jill bag. I had a heck of a time with this. What I had problems with was the joins on each square. The number of stitches on that side of each square was off, and where the join was, was so tight I couldn't get my hook in the stitch. Anyways, when it came time to put the two sides together I was off by 7 stitches! Ugh...I hate when that happens.

I do like how the colors turned out though. On the gusset and around the top of the bag I used that dark blue that I used in some of the squares. Now I'm done with it until I can get the sewing machine to make the lining for it. Then I'll make the straps. 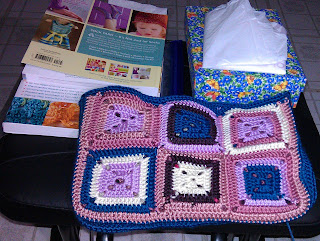 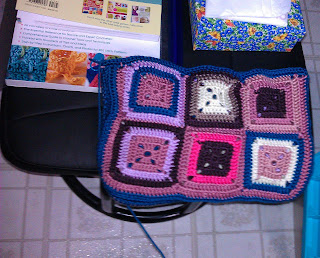 And last but not least is another hobo bag that I started and finished crocheting yesterday. I love how the colors turned out, although it's kind of hard to see in the second pic because of the lighting (I took the pic this morning at work).  This one will get a lining too. So now I am up to 4 bags that need linings! The sewing machine will pay for itself real quick won't it??  I did this one with a G hook and used Bernat Mosaics yarn in the Medusa color. I have two other colors in the Bernat Mosaics and I'm seriously thinking about making more bags. I'm truly the bag lady! :o)  I love the way the Mosaics turns out in color on the bag. It's almost one whole row of each color. And while I was at the store yesterday I happened to spy two small skeins of Caron Paints in the color of Oceana which you can see the tips of in the first pic. Those will be for a bag too. Gee...guess what everyone is getting for Christmas this year?? lol  I truly love how they work up so quick and no sewing up of seams. You just have to make sure and count. :o) 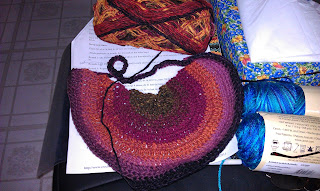 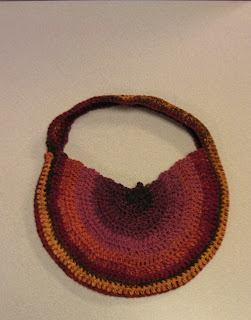 Lastly today I want to show you Leo's usual spot while I am crocheting. I happened to notice him yesterday with his little arms curled up under him and it was so cute I just had to take a pic. The second one is him laying outside yesterday afternoon. He had a shower with me yesterday and this is what he does.......goes outside and lays on the ground. :o(  Of course he was dry, this was several hours after his shower. But still.... 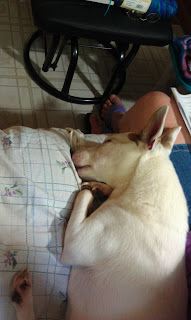 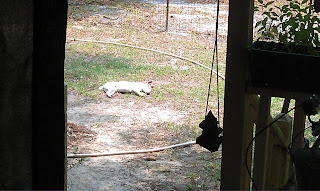 I hope your day is marvelous in every aspect! Cya soon.
TTFN
Kat
xoxo
Posted by Chain Stitch Crochet at 1:01 PM