What started out as a scarf that was actually very pretty, ended up as a hood. I started this quite a while ago and it was stashed away because I was very far along on it when I noticed that I had dropped a couple of stitches somehow at the beginning and didn't realize it. That end was wider than the the end I was working on. So I got disgusted and put it away to frog another day.

I've been at crocheting odds lately and I decided I would get it out and frog it. But when I got it out I looked at it and an idea hit me. I wondered if I could make a hood of some sort out of it. I really didn't want to frog it because I loved the stitch on it. I had done a dc, sc in one st, sk a st. The fabric created from that was gorgeous. This pic below doesn't do it justice and the lighting is horrible huh?

I folded the scarf, that I had done so far, in half.  So I decided that I had to close up the back for the hood, which I did with sl st. When I got to the point where the ends of the hood would come around the front I started to do sc on the rest of the one side and then on the edge of that end. I continued on around the end and when I got to the front of it I started doing rows of dc on the long edge to make the scarf/hood deeper in depth because it was too narrow. I believe I crocheted five rows of dc and then when I got to the end of that 5th row I was at the other end and finished that end off with sc to match the opposite end.  Does all of that make sense? 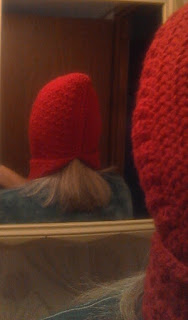 I then sewed on a heart button and there just so happened to be a hole big enough for the button to close it up on the front. 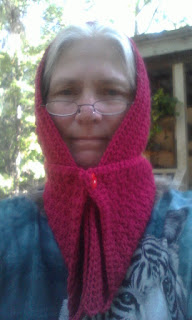 It looks rather funny in the front but ya know what? I don't care because this is going to be my hood!! Yep, something for myself instead of for someone else.  The front of it will be inside of my jacket and my neck will be covered up. I can wear it riding on my bike and my helmet will fit overtop of it, or I can wear it out and my jacket will cover it nicely. It's snug on the back of my neck so my jacket should come up to it and be covered good. My main objective here is keeping my neck and ears warm. Jeez I don't take good pics. Ugh........

I skyped with Kylie last night and showed her and she wants to borrow it for her Little Red Riding Hood costume for Halloween.  :o)  We did homework last night. That is one smart little cookie. She had a writing assignment where she had a picture of a snowman, a child and a bird. Her assignment was to make sentences, at least 7, about the picture. The first two had to tell about the beginning of what was going on (setting it up), the second two about the sequence, or next as she put it, of what happened next. Then two sentences in conclusion and then one for the end. She ended up having 9 sentences and she didn't need much help from me except for the spelling of a few words but I was impressed.   For a seven year old I think she's way ahead of where I was at that age. That I can remember anyways. I told her she was a very good writer and asked her was that what she wanted to do when she grew up. She said yes, that she'd already written a few stories. She read me one that she wrote about her whole family being whisked away by aliens. It was pretty good too. She said she wasn't done with it yet. I can't wait to hear the ending. :o)

Well that's about it for me for today. Not sure if I'll be able to post tomorrow or not. Sure has been busy in work land lately. It's all good. :o)

I hope life with you is good and it stays that way!! Cya soon.
TTFN
Kat
xoxo
Posted by Chain Stitch Crochet at 11:29 AM