Good morning! Happy Monday! I know….I hear the grumbles in the background. I was grumbling this morning when I had to get up to come back to work after a wonderful 4 days off.  But I got a lot accomplished in those 4 days. I was one of the ones who didn’t go anywhere, just stayed home with Leo. He so enjoyed mama being home and not having to get up early. I observed him in the bed this morning staring off into space and then all of a sudden his eyes would start to close. He did this a few times and all I could do was laugh at him. But anyways….it’s back at it for a few more weeks until my yearly jaunt south to go home for a week. These first two pics are my crochet table in such a disarray. But ya know what? I knew where everything was and what needed to be done, it was all right there. By the end of the weekend it was cleaned up quite a bit. My table was definitely full of color. The variegated brown in the first pic is a shawl I am working on for someone out of Paton’s lace. It’s coming along nicely but I am quickly running out of time and I can only do so much before I put it down to work on something else. I think if I work on it every night this week when I get home from work that I will have it done. This is the Elise Shawl. It’s the one I mentioned in a couple of posts back where the pattern is basically the same as the South Bay Shawl.

See the colorful granny behind the shawl? That started out as a pillow cover for Kylie but has ended up in the wip box because I need to frog a bunch of it and don’t have time now. I’m really bummed about that but oh well.

I couldn’t remember if I showed you this or not but this was a wrapper from one of the balls of yarn that I received in my large shipment from Michigan.  Purchased from Walmart, for $.37.     I found it odd that there was no date on it. Until I went to look at newer wrappers, and there was no date. I don’t know why I thought there were dates on them.

And next up is Leo. Well, Leo’s rear end.  He was being really quiet and I found him like this. As soon as I took the pic he came up out of the covers. Guess I spoiled his nappy. I found it hilarious that his head and feet are covered but not his body and butt.

Below is a small project I started and just laid on the table (with all the other wips).  Sorry for the blurry second pic but I wanted to show you that I lined it.  It’s a granny square purse/bag for Kylie. The thing keeping me from getting it done was sewing the lining together and sewing it inside the grannys. I had the two grannys done and crocheted together but none of the rest.  I decided Saturday to work my sewing machine to get done all of the linings I needed. (4 of them) This was the only one I finished totally.

A friend of mine got married Friday, and I was privileged enough to be a part of it. This was what I made them for a wedding present. Their wedding invitation was the picture in the middle taken by them as a self timered shot. And the back of the postcard told the date and time they were getting ‘hitched’ at the chicken coop. Which the wedding was on their back porch. It was one of the nicest weddings I have ever been to…….simple, intimate and beautiful. And she is not as pregnant as she looks in this pic. She’s not far along at all and doesn’t really show. But they got this idea and for fun she put a towel in her overalls. They talked about getting pregnant, then getting married. Not the traditional way but they did it in their own way. They’re married now….who cares? :o) And what I love about it is that he will be a stay at home dad. She will remain working. Again…..they’re doing it their own way. 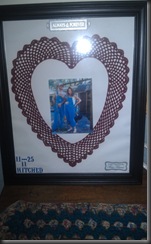 I know I showed you the ‘Tude Blonde before, but I wanted to show you the hat I mad her and the box she will be in until Bella opens her at Christmas.  I found boxes like this at AC Moore’s for $.99 each!  I love them! I got one for Kylie too and put the Hello Kitty hat I made her in it.  I think I may go back and get more if they have any left. The Hello Kitty hat turned out good I think. I should have put the bow up higher but I don’t think Kylie will mind. Hope not anyways. :o) 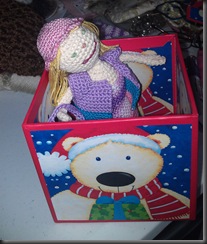 Below is part of my marble keychain fobs for Christmas presents. I wrapped these up Thursday for their recipients. As well as the little rose bag. 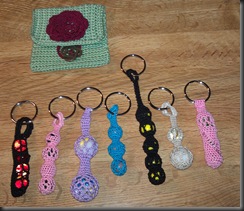 And lastly I started another baby yesterday and this one I am writing the pattern down for it, to share with ya’ll. I know some of you don’t do thread but I think it may work out with yarn for a bigger baby. I’ll have to try it when I get done with the thread one.

So folks….my weekend was very productive. I wish I had more time off but not until it’s time to head home. Most of my Christmas is done. Just a few more odds and ends.

I hope you all had a wonderful Thanksgiving. I missed out on a lot of food but hey….my butt, thighs and belly didn’t need any of it. I enjoyed fried broccoli and left over fried lemon pepper chicken. (Fried them both in the pan with seasonings. OMG)

Enjoy your week! Try not to stress too badly about Christmas. It’ll soon be here and gone again. Much love from me and the Leo'-myster.