Happy Tuesday!! Thank you all for the kind words. I may not know you personally but I consider you my friends. We have this common blog thing going on and our intertwined lives internetally (I know that's not a word and say that phrase three times) give us the bond that we have. I hope to maybe someday meet you all personally....that would just be wonderful to me. You never know! If you see a big white motorcycle with a gray/silver/white haired big woman on it come riding up, a huge hug will be the first order of business. :o)

So....on to the pics of some of the things I have had come off of my hooks since the last time I posted an actual post with pics. (BTW...I still haven't figured out that dang iPad thing. Too much other stuff going on.) For the most part I have been making a lot of hats. I stumbled on the easiest hats to make. A friend of mine called me up right before my two weeks off, that I had previously made a couple of hats for a couple years or so ago and requested 5 hats...for himself. It seems a couple of his others walked off, to not be returned. So I made 3 with the promise to make the last two while I was on vacation. When he picked them up he said the 3 was good for now. So when he left me he saw his doctor friend that he does work for occasionally and the doc snatched one of the hats I had just made him! Well, the doc liked it so much that he told my friend to ask me to make him one and he'd pay me $20 for it. Not a problem. I made it before I left to go south. When I got home I told my friend that I would bring it to work so he could come pick it up and also told him that I had made 4 more since I last talked to him. He called me up not long later and said 'The doc wants all 4 hats and he'll pay you $20 a piece for them.' OMG...you're kidding me! Well I had already given two of the 4 hats I made away, and the other 2 were girly colors. So I got busy and made 3 more manly hats for the doc. I am on a hat roll. They're super easy, super warm, and only take a couple of hours at the most to make. All they are is either single or double strand yarn (depending on the type of yarn) and done in all half double crochet with either 5 or 6 increase rounds, until they reach the bottom of my ears. Then if they are double strand (usually with contrasting yarn) I will do the next to last round in the lighter color and the last round in the darker color and fasten off and weave in the ends.  I am making a bunch up and going to go to this thing they have in Savannah once a month called 'First Saturday' and see how well they sell. Not at $20 each. I thought that was a bit much but that's what he offered and paid for them. I think $8 is fair. What do you think? Look and see some of what I've already done: 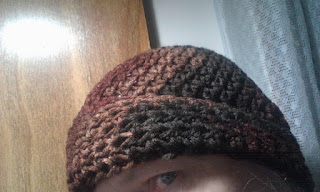 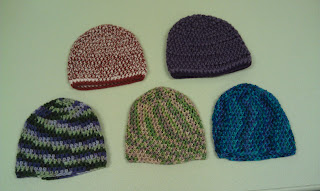 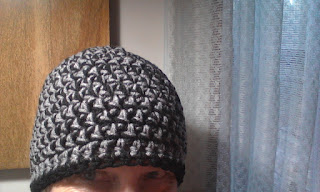 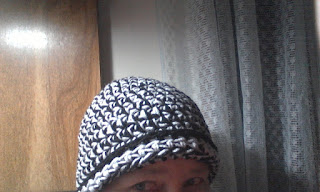 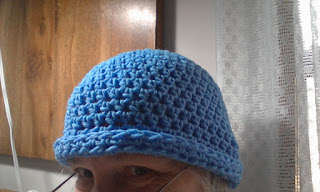 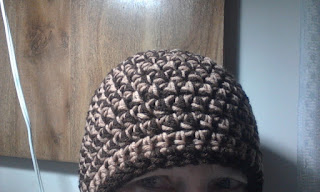 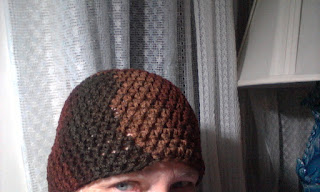 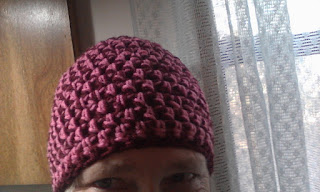 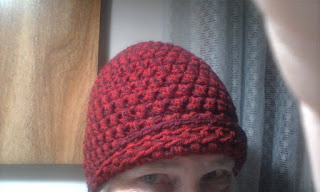 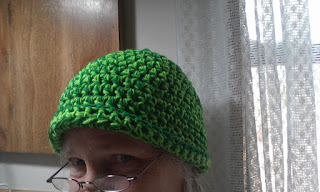 There are 4 hats not shown that I didn't get a chance to get pics of before I gave them away. The one brown one that I have pulled up quite a bit in the front (the first pic) was the leftover of the skein from the first brown one I made. I was going to keep it for myself but I took my hats to NC with me to show my sisters and Sue (who lost her boyfriend) liked that one and asked could she have it. How could I refuse? :o)  So what do you think? Is $8 a fair price? I welcome your feedback.

So my next round of pics has to do with Darla. She is my newest baby doll for Bella's birthday this Saturday. She was a labor of love, literally. I couldn't wait to get her hair done. It's so soft and silky. Bella's hair is blonde. Remember when I did Madge for Kylie? Kylie has brown hair. Now each girl will have a doll of their own. :o) 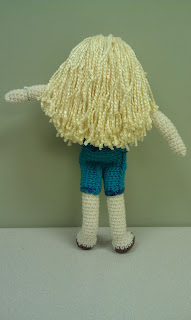 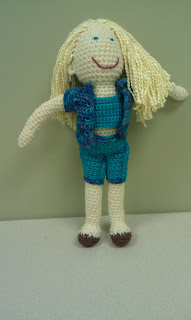 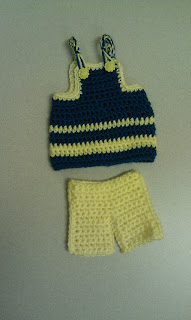 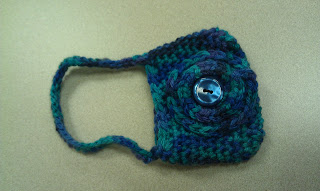 I was just sitting here thinking that I need to go home tonight and make Darla a hat. I think I might have made more clothes for Madge than what Darla has. I only have one more day before I have to send her to Bella.

Next up is a lapghan that is kinda weird. I had started it a couple of years ago and as usual for me I got bored with it. So I put it up. Well, I got it out determined to do something with it but unfortunately didn't have the pattern with it. So I looked through my books and found the box stitch in one of the Harmony Guides books. Since I already had 3 different colors of purple what's one more? I had a leftover skein of dusty purple which I think was a Vanna's Choice color but the wrapper was gone. It's a rather odd piece altogether but my other sister (I have 4 by the way) loves purple. She loved it. It's warm for sitting on the couch covering up your legs. If I hadn't intended it for her I would have kept it myself! I worked on it during the cold spell we had and it was nice and warm. So half of the lapghan (long ways) was the first pattern and the other half is the box stitch. Different. 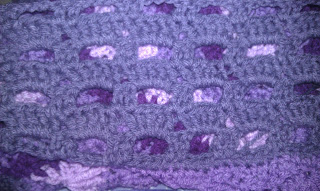 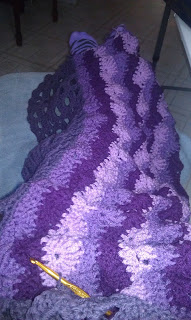 Next up is not crochet related but two wall hangings that are in my sisters' bathroom (the one that I gave the lapghan to). I stayed with her part of the time while in FL. She's had these critters hanging on her walls for a very long time. She found them at some craft/art show I think. But I've always liked them. Aren't they cute? 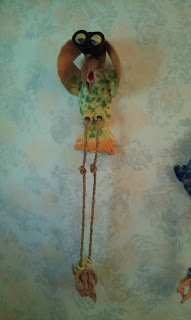 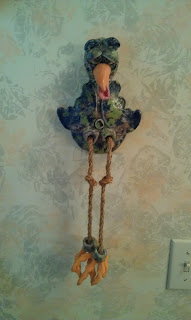 Well, that's my picture show for now folks! :o) I'm thinking I have more but have run out of time this morning. I'm looking forward to catching up and visiting with each of you. Thank you for letting me into your lives and I am proud to know you. May the sun shine down and warm your lives up like you have warmed mine!

TTFN
Kat
xoxox
Posted by Chain Stitch Crochet at 7:18 AM