A Rose Garden of Some Sort

Happy Monday! Another work week, yippee! (I’m being sarcastic) The older I get the more I don’t want to work anymore. I’m one of those people that could be content to stay at home. I’m not one to get bored too easily. There is always something to do or get into or start.  I have been in the working world since I was 16. I believe that if I hadn’t had to start my life over at the age of 42 that I would be retired or close to retirement. I’m not whining or crying, just stating a fact. Although it sure would have been nice. But life has a way of changing in the blink of an eye, as most of us well know.

So on to some hooky stuff, after all, that’s why I’m here most of the time. :o) Below is a project that started out as one thing and developed into another. Mainly because I didn’t like the way it turned out. The yarn is Caron’s Rose Garden. And although I love the colors, it’s too splitty to sew to.  I had intended this for a purse of some sort but after going around the top of the lining twice, trying to sew the lining to the outside, I was very aggravated.  So what started off as a purse, quickly became a potpourri bag.  I’m sure it was a combination of my inabilities as a sewer (seamstress) and the splittiness of the yarn that conjured up the aggravation.  I sometimes don’t have patience and when something is going south (bad) quickly, I tend to give up too quick. This was one of those times.

I was proud that I was able to put together the lining on my sewing machine. The bottom was what I was worried about but that turned out to be the easy part. I was a little concerned for the sides but figured out quickly that I could just make folds at the top to narrow the opening to where I needed it to be while not taking away from the inner size too much. (Does that make sense?)

The bag was easy to crochet. I didn’t use a pattern, just started crocheting.  And while I am on that subject, I want to applaud designers and pattern writers. I suppose I could have written down the steps I took to create what I made, but I didn’t. And thought about it while having a go at sewing that dang lining in.  I was too lazy to write it down. What I made isn’t spectacular or perfect, but I made it, and it does serve a purpose, even though it was intended for another purpose.  In an earlier post I told you that I was writing down the pattern for one of my small thread dolls. And I am……..it’s sitting in one of my bins waiting for me to finish it up. But I’m lazy that way. And I will finish it, but who knows when that’ll be?  Hopefully sooner than later. Anyways………. 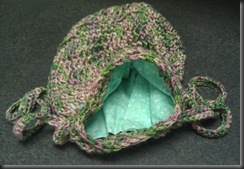 So what’s a potpourri bag without potpourri?  I got two bags of potpourri at Wally World for a buck a piece!  I was overjoyed to see it was only a dollar. This birthday present for one of my besties, Mel in FL, cost me about $10 to make material wise (if that). Love wise was priceless. :o)

I worked on a few other projects but only finished one other one this weekend. One of my other besties in FL had to put down one of her babies last week. I got her and her husband a card and made a cross and blocked it yesterday. I was going to put the baby’s name on it but my embroidery skills are even worse than my sewing skills. So I left it alone. It’s just a simple #10 pink outlined in a #10 dark red thread. No pattern was used, nor written, for this project.

On the home front, I turned double nickels on Saturday. The day started off really well until I received a disturbing message from my daughter on facebook. Have I ever told you I hate facebook? Well this message as it turns out, was a misunderstanding on both of our parts, and resulted in a rather miserable rest of the day for me. And although it started off with a misunderstanding on her part, it was my fault for not calling her and asking her ‘What the hell???’.  I have this stupid affliction of sometimes suffering in silence because I don’t want to be in the heat of emotion and say something that I shouldn’t and end up regretting later on. We all know that we can’t take words back once they’ve been uttered. I’ve learned that the hard way a few times. But if I had called and gotten clarification early on then the rest of my day wouldn’t have been so bad. Stupid afflictions……..what can I say? Her poor choice of words lead me to a conclusion that was no where near what it actually was. And I reread this message several times. Stupid afflictions. :o(  Nuff said.

One more week and January is already almost over. Geeze.

I hope this Monday morning finds you all well, happy and showered with love. Cya soon!

Posted by Chain Stitch Crochet at 9:27 AM