This is my least favorite day I think. I haven't been sleeping well and last night wasn't any better. We've got 'overseers' coming here from one of our other offices and it always makes you wonder whether they are coming here to spy and maybe make it so that you won't have a job anymore because 'your job went away'. Paranoia will destroya. I don't think my job is in jeopardy but it's kind of funny that someone is coming to see my procedures. Really?? After I've been in this same job for 12 years and this company 7?? I've got written up procedures that I have sent them so it's not that complicated. At least I HOPE my job isn't in jeopardy. That would suck big time! I'm keeping my fingers AND my toes crossed. I was almost debt free until I bought my car. Figures huh???

It's cold here. It was 19 this morning when I left the hacienda to make the work trek. It was cold yesterday too. But at the end of this week we'll be back in the 70's.  Crazy weather we're having this year.

I know what it was I was forgetting in my last post. When I was in Hobby Lobby getting the yarn for the turtle shell I found packages of crocheted flowers in different colors. I can't remember how much they are charging for them.....I don't think it was over $4 a bag, but I could be wrong. 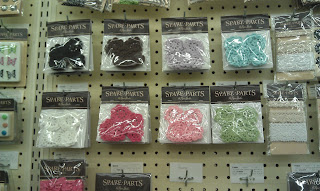 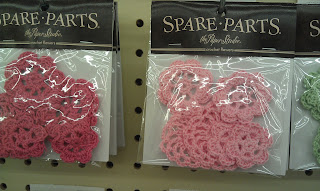 I was surprised when I looked up and saw them. Spare parts. Hmmm.

So other than that I don't have a whole lot. I have been working on a birthday present in between other works in progress and almost got it done when I decided I didn't like it. Why do I do that?? I started something else and I'm running out of time because the birthday is the 22nd of this month! I think I'll be ok though. I started one of my little thread dolls and they usually go pretty quick. But I was a little bit perplexed as this doll was smaller than the one I started earlier (so I could write the pattern down). You know....the one I'm procrastinating on writing the pattern for? I pulled out the instructions just to double check what I had done so far, and actually changed some rounds. But I used the same hook, a #3 steel, and some #8 ecru thread (which I had used #10 on the first one) and the #8 one is smaller. What's up with that? I am perplexed. Sigh......

Anyways...I have decided that I will open an etsy shop, but not right away. I'm trying to build up some inventory for it. I have been looking at other shops and what they have to offer and how much they are charging and what their policies are....yada yada. I was going to back down because there is sooooo much crochet out there, who's going to buy mine? But then I started thinking that my hats are different. I haven't seen any like them. My marble key chains are different, I haven't seen any of those. I'll give it a go. It won't be too much of an investment if I don't do very well.  How do I know if it will or won't succeed if I don't try right? I am, however, going to go to craft fairs once my Leo is gone. I'll be able to travel weekends without having to worry about him. So I have plenty of time to build up some inventory. Lord knows I need to bust some of my ever growing stash. I just thought it would be nice extra income and hey, wouldn't it come in handy if I did lose my job? I think that right there is my motivation.

OHHHH, I almost forgot. GUESS WHAT??? Remember the doc that bought 4 of my hats for $80? OMG, I received an email from my friend who got me that lovely job to begin with. The doc wants 24 hats in December to give as gifts!!!! 24...can you believe it? I about fell out. So I know I have that at the end of the year and probably the rest of my hats will do good at the end of the year also. We'll see. I just had to tell you that. I was so excited when he told me.

Ok, I best get off here now. I wanted to check in. I have jury duty Wednesday. I'm a bit nervous about that. But I get paid for the day from work and $25 from the county so it's all good. Maybe they'll pick their jury pool early and I won't have to be involved! :o)

I hope your week is full of love and sunshine! Cya soon!
TTFN
Kat
xoxox
Posted by Chain Stitch Crochet at 1:29 PM