Turtle Hatchling! Turn Off The Lights!

Many of you may not know it but in FL during turtle hatching season DNR (Dept. of Natural Resources) wants you to turn out your lights at night if you live on or very near the beach. This is so when the baby turtles hatch, they won't get confused and go the wrong way toward the light instead of toward the ocean to swim away. I suppose this probably applies anywhere there's a beach that turtles lay eggs, not just FL. I only knew that because I lived many years in FL.....30 of my double nickels to be exact.

What does this have to do with crochet you ask? Can you say ooooohhhh and aaaaahhhhh? Baby turtle hatchlings of course! 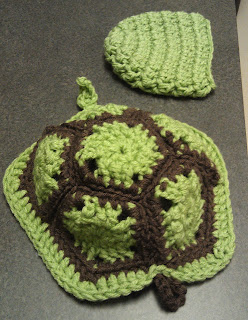 Is that not just the cutest thing ever??  One of my friends that I 'grew' up with in FL posted a pic on the dreaded facebook last week and I was like awwww...that's so cute!  So she came back with a message...do you think you could make this for me to give my daughter? How could I refuse? So I went back to find the post in facebook and it was gone! I hate facebook. Have a I told you that? lol. Several times I'm sure. Well then I had to go searching.

First I went to Pinterest and couldn't find it. My next go to place for all things crochet was Ravelry. Tah Dah!  I found it and the pattern belonged to Calleighs Clips. You can either find Elisabeth on Ravelry if you have a free account, or you can go to her blog and click on patterns at the top right. In her collage of pics if you will look all the way to the right on the top you'll see it. She has quite a few different baby patterns like this turtle hatchling that are soooo cute. But I like this one. :o)

I sent Debi (my friend from FL) the same two pics as above. I can't wait to hear back from her. I also told her that with the leftovers from the 4 skeins (the pattern calls for crocheting with double strands of each color) that I am going to make a little shirt/jacket and hat that are in my new Crochet Today! mag that I got last week. I was going to make a blanket and actually started one but that wasn't going too good so I frogged it. I wouldn't have had enough left for a big enough blanket and I would have had to go back to Hobby Lobby for more yarn.  I'm sure I have enough left for this shirt and hat. I'll do the yoke of the shirt in the Sweet Pea and the bottom in Chocolate and trim in Sweet Pea and do the hat in both colors.  I'll post it when I'm done.

I have a couple more things that I crafted but will have to wait to post them as the recipient may read my blog and I don't want her to see them before hand.

So on to some other news. Tara has taken up residence in my hallway between my two spare rooms and 2nd bathroom. I actually have her positioned so that if someone came to the door and was on the porch they would see part of her and think maybe someone was there. (I know that's lame because she doesn't move or talk but ya never know) I live way out and back in the woods from the road. Anyways....quite a few times this weekend I would either be in  my chair or somewhere else in the house and I would hear Leo bark, and he wouldn't quit. I'd go see what he was doing and he would be standing in the one spare room, just inside the doorway barking up at Tara, like he wanted her to give him a treat or something!  I laughed at him but I cried....literally.  He can't see well enough to know it's not me. I would say something to him and he'd come running when he saw that I was standing there. If I called for him while he was barking and I was out of his sight he couldn't hear me and come. I am beside myself because I know what's coming. And I don't want it to.

I found a site that my ex-step-sister has 'liked' on facebook. The Gentle Barn. It's a place in California that takes in rescues of dogs, cats, goats, horses, cows, pigs, peacocks, turkeys...you name it. They also have a blog. I was reading last week the entry about the lady having to put down her terrier that was a rescue and the last year or so of the babie's life before that and how she knew it was time to put him down. I cried. But some of what she said brought me to the realization about some of what I've seen in Leo in the last year has been happening. So...............yea. My last tie to Jeff and PeeWee and Misty is on his way down. I honestly don't think he's going to make it to the end of this year. Not after what I saw this weekend, and what's been  happening all along, slowly but surely. I've been having a problem with him not drinking all day while I'm gone at work. I don't know why he's doing this. I have two bowls of water out for him, one on the front porch and one on a little stand I made him next to his dog house out back. He knows they are there, I showed them to him. He insists on not drinking until I come home. When I open the gate to come in the yard he runs to the house as fast as he can and he's at the door waiting on me to open the door and he hauls butt to his waterbowl and drinks until it's gone before he greets me or wants a treat. I know this isn't good for him. He is so dry that he's licking his lips the whole time he's at the gate waiting for me to get out of the car and open the gate and then again while we are at the door and I'm trying to get the door unlocked and open so he can run in the house. I can't tell you how I feel right now. About Leo. I do know that I have felt so bad about putting PeeWee down when I did and wondering if it was the right time but after reading about the little terrier and thinking back on some of what PeeWee was doing I kind of feel better because he wasn't himself either. He had gotten real skittish, wouldn't let me hold him or touch him and that just wasn't PeeWee. Dogs actually lose their mind like humans do. And reading that after seeing PeeWee and thinking back on the whole thing made me think that I probably did put him down at the right time. I probably should have sooner.

PeeWee was almost 14 when I put him down...he was 2 months shy of his birthday. Leo will be 14 next month on the 30th. He has made it longer than his mom and dad. But he is declining and I can see it. I'm trying to enjoy the time I have left with him. I hate death.

I thought I had something else I wanted to share with you but it escapes me at this point. I have a lot rolling around in my head so it's no wonder it escapes me. :o)  The weather was wonderful here this weekend. I had both doors open yesterday. It got up to 77! My bulbs are starting to come up and I noticed on the way home from work Friday that a lot of the trees are blooming with leaves. Lord help us if we get some really bad cold weather.

I hope you had a wonderful weekend and that this week will be good to you. Cya soon!

TTFN
Kat
xoxoxox
Posted by Chain Stitch Crochet at 9:42 AM