Goodness....I feel like I've been gone forever! I've missed you all and have a lot of blogs to catch up on.

I have had a rough couple of weeks. I'll try to be as brief as possible trying not to forget things, but I'm sure I will.

I went to the outpatient surgery center a week ago this last Tuesday to have my gall bladder out. I had gone the Friday before for my pre-screening for surgery. The lady in there told me I would be there overnight, contrary to what my doctor told me. So I rolled with the flow, that was the only way to go.   My sister and I get there at 5:30am Tuesday as I am the first in line that day. They are getting me ready and my doctor comes in and says that I will be going home later that day. Hmmmmm......odd I thought, but I didn't say anything because there are bunches of people in my room getting me ready. I'm thinking that the lady in pre-screening didn't know what she was talking about. Cool.

They connected my IV and snuck the sleepy fluid in it. No one advised me of being put out, it just happened. The next thing I remember vaguely is in recovery asking twice was I dreaming, and the the nurse telling me no, I was not dreaming.  And then next thing I know is I am coming out of it in my room and the doctor is telling me that there is the option of chemo and radiation, but he would be happy to be wrong....and that I would need to stay overnight because of the extensive incision he hadn't anticipated on making.

I'm like......WHAT???  I am still not with it, I'm so drugged up. In my mind I'm wondering what is going on, why did he say that.  And then with that thought I start thinking in my mind that if he's cut into me that if I do have cancer that it's going to spread quick and that chemo and radiation are probably not much of an option and I'm a goner.  So I start making mental notes on what I need to do, what I want to do before my 'check out' time.

My sister didn't hang around long after I got back to my room because of Leo being home by himself and we had had a bad storm just after getting to the hospital, plus traffic is horrible between the hospital and home, 40 miles away (she's from out of state). Before she left she said to me that we were going to do what we needed to do to see this through and I held up my hand and told her I wasn't going to talk about it right now. She kissed me on the cheek and left.

One of my Bomber Girl sisters came and sat in my room with me until after work when 3 of my other BG sisters came to see me. They were made aware by T what was going on with me. We didn't talk about it but I had said to T earlier in the day right after my sister left that I had cancer and probably would not make it much longer and that I loved her for coming to be with me.

Anyways....I was drugged pretty heavily all day and kept going in and out. When I was of some kind of 'awake mind' I started making these lists in my head. I'm trying to keep a positive attitude because there's no other option at this point.

My room was horrible. I had no clock so no concept of time. The tv cable went out around 11pm that night. The night nurse was coming in every three hours sticking 2 percocets into me, while the day nurse only gave me one when I'd call for it.  I think she thought she was doing me a favor because I couldn't sleep but I think it did me more harm than good to tell you the truth.

When morning came my doctor came in fairly early. He told me at that time that my gall bladder was the size of his fist (they're supposed to be small), it was hard as a rock, partially wrapped around my intestine, and my liver didn't look right so he took part of my liver and sent it all off for testing for cancer. He also told me that he would call me as soon as he found out the results so that we could proceed right away if it was cancerous.  What can I say at this point?  I was still not coherent enough after a long night of nothing but percocets to ask questions. All I wanted was to go home.

After the shift change, the nurse wanted to get me up so I could eat before going home. The food in the hallway smelled good. But the second I got up I was nauseous. They had to give me phenergan, which is pain reliever with anti-nausea stuff in it. It kicks your butt. By time it started working my food was brought in and it was cold.....scrambled eggs, a biscuit and coffee.  It was horrible.  I only took a couple very small bites of the egg and biscuit. Then I finally was able to get up and walk down the hall so I could come home.

After getting changed and getting all my stuff together, with the help of my sister, we got in her car to come home. There is more to the story but it's mostly things with my sister. I love her, I'm glad she came to be here with me to help me....but I think she hit every bump in the road on the way home, or at least it seemed like it.  She didn't bring my glasses so I could see and all the drugs in me made me see double.

I was sick for two days after coming home, couldn't hold down food. Have you ever vomited after surgery with a good size incision underneath your boobs, or in my case melons???? It was horrible.  I couldn't go #2 (I know...more info than you want right?). I determined that those percocets were the culprits.  So the last one I took was 1pm Thursday. Even though I was in pain I finally could hold food and the next morning early I was finally able to go to the bathroom. I also had a fever. I called the number on the instruction paper they gave me to come home with. No one ever called me back. Thankfully the fever finally broke.

Poor Leo.....I think he thought I left him like his daddy did. He got up on my bar, via the back of the recliner and knocked one of my plants in the sink the day of my surgery. When I came home he acted funny for the first day and then wouldn't leave my side after that.

My sister went home Friday morning thankfully. Like I said, I love her and am so thankful she came but I was miserable and just wanted to be by myself with my little boy who curled up next to me where ever I was.

I got the call Thursday afternoon from my doctor........BENIGN!!!!  I couldn't thank him enough to let me know as soon as he found out. I had called his office that morning to make sure they had my cell number because I had turned off my home phone to try to save some money. His office person told me that I would probably not hear from him until Monday because he was in surgery both that day and Friday. I'm glad she was wrong too.

I have dodged two C bullets so far this year. I can do without any more medical drama.

I am off work until Monday getting better each day. Yesterday was the first day that I felt human again.  I see my doctor this coming Tuesday and have a list of questions for him.

Today the sun is shining here and it's still springtime. If it was storming I would still be happy because I have another chance at some more life. Much love to you all and see you soon!
TTFN
Kat
xoxooxoxooxoxoxoxo

PS/I have not done a whole lot of crochet because I was not interested in it much because I've been so miserable, but I did start a bag for one of my BG sisters that has done a lot for me while I've been down. I can't wait til it's done but it's been slow going.

The 'Jill Bag'....compliments of the pattern 'Flower Tote Bag' in my new Crochet! mag that just came, is in process. I couldn't put it together as I went, like in the pattern. I tried and didn't like the way it looked. Why can't I do that????? So I am making each square and will put together when done. I am also thinking about putting a lining in it but we'll see when it's put together.

I also added a 'T' that I crocheted to a bag that I did previously that T was eyeing. Remember the one with the little pink and blue heart buttons on it? That will be my gift to her for staying with me in the hospital.  :o) 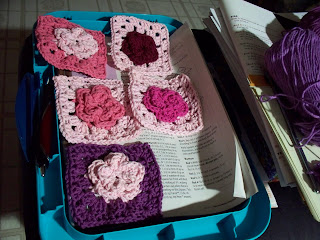 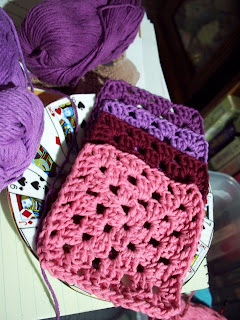 Posted by Chain Stitch Crochet at 11:14 AM