On other peoples heads.  These poor people who are having to deal with the storms and rain, I feel so bad for them. We are under tornado watch today as that same system that just wreaked havoc in the midwest and Alabama is coming through. We have lucked out in each of the ones that have come through this spring. I just can't imagine what people are going through.

The devastation is unbelievable. I have been through hurricanes but never through a tornado. My heart goes out to those who have lost loved ones and their houses and worldly possessions. That goes for those in the flood areas. I've seen stories of people who have had to start over so many times because of flood. I can't comprehend it all. To have to pick up the pieces and carry on would be mighty hard. But many have had to do it, they have no choice. 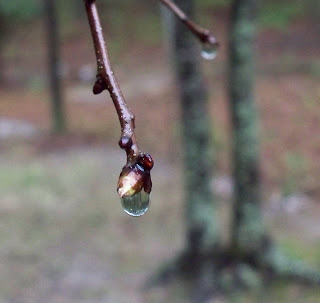 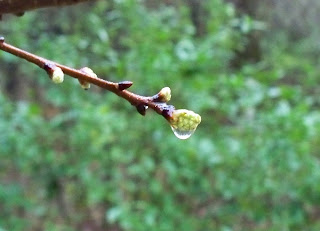 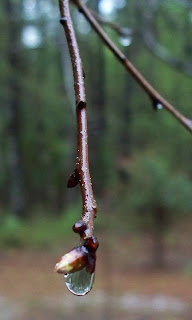 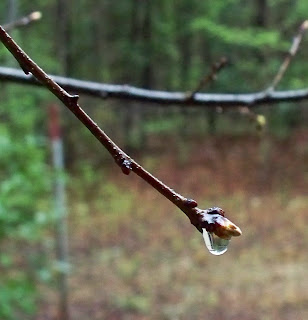 These pics were taken a couple of weeks ago when we had that hail storm come through. I named each of these pics - World In A Rain Drop, Rain Drop Horizon, Rain Drop Forest, Rain Drop Wonder. If you click on the pics and look at the rain drop you can see an upside down world inside of it. The tree I took these from is now fully leaved. No more bare branches.

I also took pics of one of my Christmas Cactus in bloom in April. It does it every year and it befuddles me. The whole plant doesn't bloom, just a few branches of it does. I find that very odd. And also odd is my Poinsettia that is blooming. What's up with that? I've had this plant for two or three years. I can't remember. But it's been in the pot since it was given to me. You're supposed to be able to plant them in the ground on the northeast side of the house but I opted to keep it in the pot. I might repot it  before bringing it in for the winter again. I think it will probably need it. 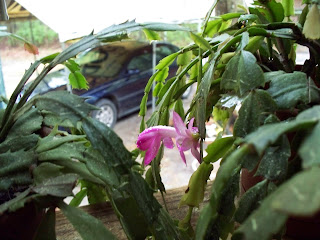 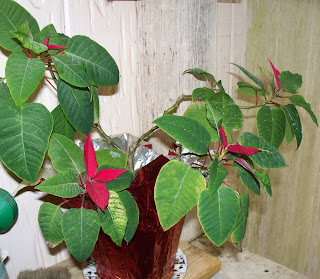 I am furiously working on the granny ripple baby blanky for Anistyn Brae. That will be the babie's name. Isn't that pretty? It's different anyways. She is due to arrive sometime around the 4th of July but the baby shower is May 7th. So I don't have much time to finish it for the shower. I'm only going to do 1 of each skein and I think that will be big enough for a baby blanky for her. I wasn't too thrilled with the color combo I picked in the beginning but I think it's grown on me. I kind of like it now.

It's made out of Caron Simply Soft and Caron Simply Soft Heather. The colors are Off White, Victorian Rose, Deep Plum Heather and Truffle Heather.  I hope Terrayne (Anistyn's mom) likes it. I'm also making a doily for Terrayne for the shower. Mom's very rarely get things at baby showers and I think that bites. So Terrayne will have a present too. :o) I'll take a pic when it's done so you can see.

Well I best get back to it. I hope your day is filled with smiles and love.
TTFN
Kat
xoxoxo
Posted by Chain Stitch Crochet at 11:26 AM