A Weekend of Crochet

Happy Monday morning to ya!

I hope you had a good weekend. Mine was filled with crochet. It was very nice here in southeastern GA. I had the doors open both days until late in the afternoon when my a/c kicked on. Both Saturday and Sunday morning the temp when I got up was 50. That's a tad chilly but actually felt good. When you get used to almost 90 degree days and then get a couple of 50 degree mornings it is chilly. What very weird weather we are all having this year so far huh? I only hope that the tornadoes will cease so that people can start rebuilding their lives.

And hey....what about Osama Bin Laden being dead?? I didn't learn of it until this morning when I got up to go to work. Normally my weekends at home consist of CMT, the Weather Channel or ID on the tv. I don't hear any news all weekend, unless someone calls me and alerts me to it, or I am out and about and hear something. I was happy to hear this news, but I was somewhat disconcerted when they said they buried him out at sea. WHAT??? What's up with that? And I want to see pics. Sorry but I want to be absolutely sure that he's gone. Those two things made me a tad uncomfortable. The world and my last 20 years have made me that way. My trust in a lot of things, the government for one, has gone by the wayside and I need to see that what they are saying is the truth. I'm sure I'm not the only one either. I'm sure there are many family members of the 2,976 people that lost their lives on 9/11 that want to see also, to make absolutely sure that what our government is telling us is the truth about this despicable man. It's about time but I can't believe it's taken almost 10 years for this to happen. It should have happened a long time ago.

ANYWAYS......as I said, I was busy all weekend crocheting. I finished Anistyn's blanky. I was happy about this also. I chugged away until I ran too close of running out of the truffle heather. And I didn't realize something until that time either. Did you know that all of the Caron 'heather' skeins have only 5 oz. in them, when the regular colors have 6 oz. ?? What's up with that too? I used the Truffle Heather and the Deep Plum Heather and they were 5 oz each. The Off White and Victorian Rose were both 6 oz skeins. So I had some left over.

I decided to make a little container with a lid in the same colors as the blanky, and I made a doily out of a real pretty pink (can't remember the exact color) #10 thread and #7 hook, and I put the doily in the container for Terrayne. And dummy me...I forgot to bring the book that I got the pattern for the doily out of. I got the book at AC Moore the other day. Sorry, I can't think of everything these days. I'm not totally through with the container though. I'm going to make an off white flower to go on the top of the container. 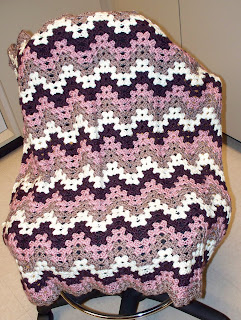 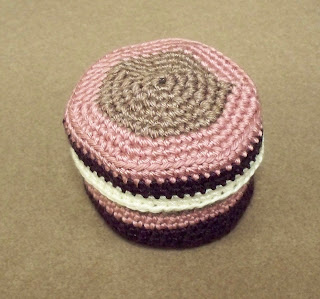 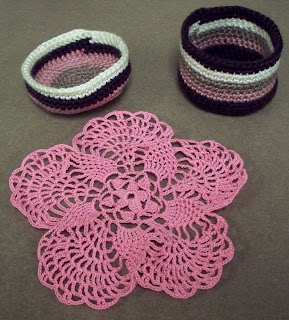 I also made a happy man for one of my friend's husband for his birthday next week. Men are so hard to make things for when it comes to crochet. I have a really hard time with that. So I thought I'd make something that hopefully will put a smile on his face. These are so easy to make. I've made quite a few of them. The lighting on the front side pic is horrible. :o( 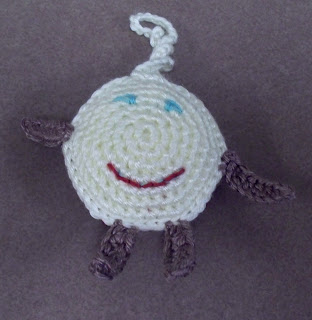 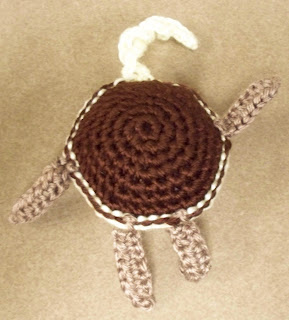 I also made another heart and shell in the purple and cream that I told you about. I think I'm going to send both of these to my daughter for Mother's Day. And ya know what? I was quite surprised and just can't figure out what happened but the purple and cream one is smaller than the other one. Both were made with a #2 hook and both were made with two strands of #10 thread. What gives??  It's not a lot smaller but when I put them together I noticed the difference in size. Strange. 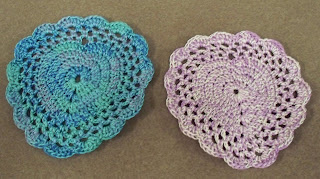 So that's how my weekend was. Full of crochet happiness for me. And Mr. Lick Lick, well he was in and out of the house and laying next to his mama when he fancied. He likes it when I'm home, but I think he also enjoys me going to work so that he can snooze his life away. He's older now and he has been doing a lot of that. I know my time is growing shorter with him, I treasure each day I can spend with him.

May the sun shine and spread warmth throughout your week.
TTFN
Kat
xoxox
Posted by Chain Stitch Crochet at 8:28 AM