Happy Tuesday! I hope this post finds everyone well and happy. 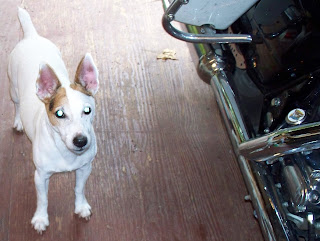 My little Leo, as the title suggests, is very Lion Hearted. He thinks he is bigger than life and sometimes knows no fear, as Jack Russells tend to be.  But it's a totally different story when storms come through.

Yesterday when I came home from work Leo was not in the window, where he usually is when I pull up the driveway. I get scared when I don't see him there. He's getting up in years. He's getting very clumsy and sometimes hurts himself when he jumps and misses his target.

I came in the house and called for him, he didn't come. I got really scared then. He wasn't in my chair, he wasn't on the bed. I walked into my bathroom and there he is laying on the floor and when he saw me he got this look of total relief on his face. 'Ohh...you're home!!' And then he was so happy to see me. And the further I go in the bathroom there is stuff scattered. The waste basket has fallen over, the cleanser that was on the edge of the tub is in the tub, the shower curtain is half in, half out of the tub, the bath mat is scrunched up on top of the a/c vent.  My little Leo The Lion Hearted had to endure a storm by himself and was so scared he ended up in the bathroom. From the looks of it he jumped in the bathtub and then back out and layed on the floor until Mom came home.  I laughed at him and he jumped up on the bed barking at me but came when I called him so I could hug him and scruff his fur up. He's so funny sometimes.

My crocheting hasn't been much. I went to the dr. yesterday because three weeks ago I was stretching at work and something in my right wrist/palm snapped. I felt it and heard it. I have been hoping it would heal but I'm not that lucky. It's been bothering me so I finally made an appointment to see my doc, who in turn has to refer me to the specialist. They're supposed to call me for an appointment. I think it is probably carpel tunnel. After all, I'm on a computer all day. And then I go home at night and crochet until bed. Lately not so much but as much as I can deal with. HR told me that it's a work comp claim, but I don't know that I want to claim it as work comp. I guess I'll see what the specialist has to say when I go. I'm not looking forward to it.

I think I told you my niece was living in Turkey as her husband was stationed there with the Air Force. She had told me about how amazed she was with Turkish women crocheting and all the beautiful stuff they made. She became friends with some and would watch them while they crocheted. His duty there is up and he's been reassigned to San Antonio, TX. She had my sister (her mother) send me a couple of items that she brought from Turkey. I guess she had given them to her and my sister knew I would appreciate the crocheted stuff more. I just love the towel. I think the thread is #20 but the work is beautiful. I can't figure out the placemat but I think I've seen this stitching somewhere. The front is the same as the back. 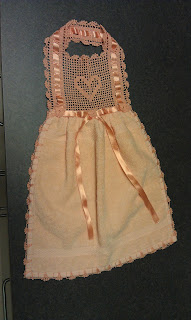 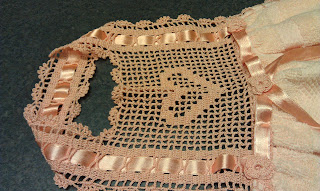 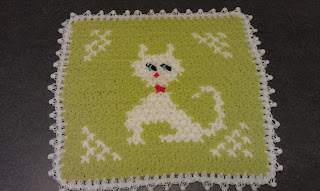 She told me that they didn't use patterns, that she ever saw. They just crocheted from what they had learned to do probably since they were young. Amazing.

Duty calls for me. I've been swamped but it's all good. Have a wonderful day and I hope the rest of the week follows suit. Cya soon!
TTFN
Kat
xoxox
Posted by Chain Stitch Crochet at 7:54 AM