Hi! I have been so swamped and busy lately. There is just not enough hours in the day sometimes. Work has been very busy. That's a good thing though. I'm very thankful to have a job.

Crochet wise I've just been doing little things. Madge has a good sized wardrobe for now. And a thought just hit me...I wonder if I could crochet her a suitcase for all of the clothes I've made her.  Hmmm. :o) So I've been working out of my scraps bowl to make her clothes and what not. I'm trying to bust some of it and I'm getting there. I didn't realize my bowl was running over with scraps until I went to clean out my corner.

I also started a door draft snake for my sister with scraps and ya know what? What I thought would be a relatively easy project is not really that easy. When you start getting so big with it it's hard to crochet in the round because you have to kind of hold it up to crochet and your hands and arms get tired. I can only work on it so long before I have to put it down. I didn't get any pics of it yet. I'm not really liking it and I told her I would make her two. :o( lol. It's turned out to be one of the most awkward things I've ever crocheted. 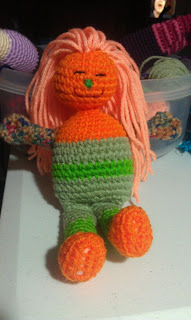 This is my 'Fall Guy' (with long hair). He is made totally out of scraps too. I should have made his arms and hands out of either the green or orange. They're hard to see. 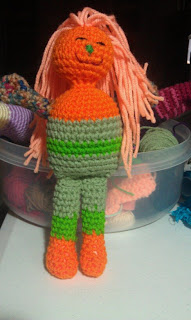 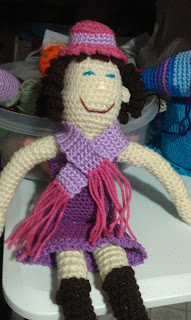 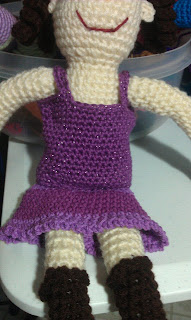 Last night I made another key chain fob (is that what they're called??). This one is a tad bigger than the last one. I crocheted 16 sc across and 16 rows. Then I edged it with sc and fastened off. Then I started crocheting a flower in the center of it. I like how it turned out. Then I chained 20 or 25 in maroon and came back down the chain with slip stitches and when I got to the end I went right into sc's on the edge and went all the way around and tied it all together when I got back to the slip stitched part. This is the end result: 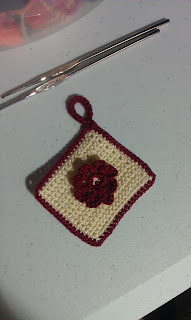 Last week I was outside watering plants and I felt something fall on the top of my foot. I looked down and this cute little caterpillar was on me. So I brushed him off with my other foot and all of a sudden the top of my foot started stinging where he had been. It continually got worse. So I took a pic of it with my phone and posted it to facebook asking if anyone knew what it was. No one did. I googled 'stinging caterpillar' and this is what came up - saddleback caterpillar - (or packsaddle) with a pic of the same caterpillar that had stung me. Apparently I'm not as bad as others are with the adverse reactions to this cute furry little creature. Apparently some people get very ill.  And just yesterday my older sister posted that her husband had gotten stung twice by one and she asked him what did it look like and it was the same kind of caterpillar that stung him. I've never seen one before this year but they are throughout the eastern seaboard all the way up to Massachusetts according to a couple of the articles I read. Who would have thought it?? 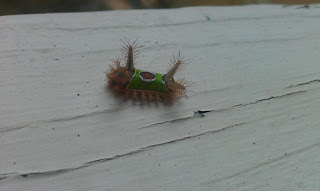 Fall has fell. lol. It feels sooo good! And we are getting glorious rain today. We need it so bad. Not as bad as Texas but we still need it. I'm not ready for the cold but it's been nice to be able to open doors and windows and let the fresh air in.

I hope your day is wonderful and full of love and laughs. Cya soon!
TTFN
Kat
xoxo
Posted by Chain Stitch Crochet at 10:12 AM