Happy Tuesday! It's a fine spring day here in the south. Over the weekend we had bad thunderstorms. I got a little over 2 inches of rain at my place. Although I had to endure Mr. Lick Lick's violent shaking and scaredness, we needed that rain badly to wash the pollen away. He was worse than I've seen in the past. I managed to give him some calming biscuits that have camomile and something else in them but they did not help at all. I cannot do anything at all while this is going on but sit and hold him as close as I can. The storm that came through on Saturday made him shake so violently I thought he might have a heart attack. It was horrible. I'm glad the storms are gone for now. 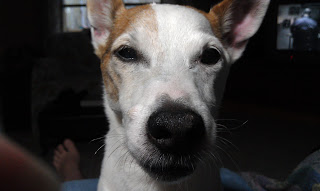 I've finished the baby blanky that I showed you a sneak peek of. I was kind of surprised at how it turned out. The stripes are not the same width. But it makes for an interesting blanky. All of the stripes are one skein each. I was going to put a boarder on it but opted not to. After much back and forth on trying to decide this, I like it plain like it is. It's done in diagonal box stitch. I really like this stitch but it sure is a booger when you go to decrease. It's hard to get used to after increasing on each row. I've never finished a blanket with this stitch so I didn't know how it would end and tried to envision it. It seemed like this blanket would never end. I was pretty happy when it did. :o) 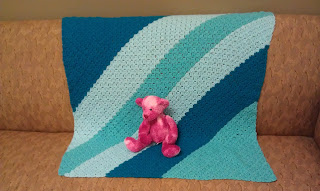 I am working on an elephant for this baby too. Everything is done except putting on the legs and crocheting and attaching the ears. I looked all over for a pattern but didn't find any that I liked. So I made my own. I did write down all of the parts so far but I think I messed up the head as far as writing it down. And I think that, because I had done the head and didn't like it so I frogged part of it and put it down for a while and then when I picked it back up I forgot to write down what I did to finish it up. I'm thinking I'll have to make another one to make sure it's right. I'd show you it but I want it to be complete. So stay tuned for that.

In other news, I received my newest issue of Crochet! And guess what? As I'm leafing through it I get to page 42 and discover that I am missing pages 43 to 58!! I was so bummed. So I called them and they are supposed to be sending me another one out but I won't get it for about 2 weeks. :o(

I'm loving this spring we are having. It's an actual spring! Usually we jump from winter right into summer with only about a week of spring. Not this year. It makes me wonder what kind of a summer we are going to have. Probably riddled with hurricanes. The last 2 or three years have been relatively scant with big storms. With the unusual winter the whole country has experienced, it wouldn't surprise me one bit. 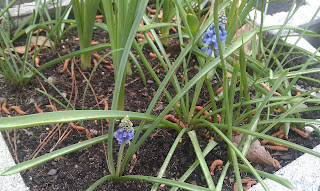 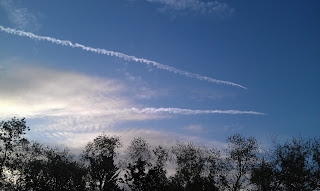 So that's all from me for now. As soon as I finish Mr. Elephant he will make his debut here. Most likely in the next day or two. He will be going to his new home this coming Sunday. :o)

I hope your spring has sprung and it's as delightful there as it is here! Cya soon!

TTFN
Kat
xoxoxo
Posted by Chain Stitch Crochet at 6:36 AM