It was 37 degrees at the house when I left for work this morning. I hated leaving Leo outside but I have no choice. He has his little house with a bed and blanky in it so hopefully he went and climbed in and got snuggly til the sun warms up the air. Yesterday was very windy and cold once it cleared up. It rained all night long Saturday night and I ended up with 5 inches in the rain gauge! We needed it though. I think it made up the deficit for the year and worked on last year's deficit. Which, by the way, I found weird that once it turned 2012 they started all over. How can they do that when we were so far behind in rain last year? I think we had a deficit of like 9 inches or so to end 2011. All I know is that I got a bunch of rain this weekend. I didn't bring in my plants either......bet I'm gonna be sorry I didn't. :o( 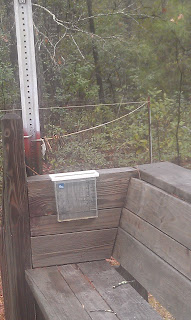 I did work on a few things crochet wise this weekend. I started on one of my 2 commissioned dolls. And figured out that leaving out one round of sc in each stitch made the head more round than oblong. Who would have thought that one round would make that much of a difference? It did and I like it. Now I'm excited to get it done. I was kind of dragging my feet, but I do have until June to get this one done. There's no time restraint on the other one. And I did start on a blanky with the colors in my last post. But I'm not liking it, at all. And I forgot to tell you that the colors of the Bella DK are numbers 17, 18 & 19. I don't know what I'm going to do.....I do have time but I wanted to get it started so I can get it done way before the babe comes. Thank you, ladies, for your input. I will definitely mull them around because clearly what I started is not what I want. I may use what I've already got for a pillow cover to match the blanky.

I finished my seafoam and blackberry hat. I love these colors together. 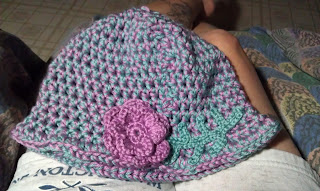 While I was getting pics off of my phone I found one that I don't think I posted but talked about in a previous post. Maybe I did though and I just forgot.....if so please forgive me. It's the 'sometimers' flaring up again. This is the beginnings of two dolls. The one on the left is the one I was writing the pattern for as I went along. The one on the right is the one I finished that is the last one I posted about. That's the one with black hair and the kitty on the pants leg. My point was that both were done with the same hook and you can see the size of the thread. So......tell me how they ended up different sizes?? I am very perplexed. (I'm also curious to find the post I talked about this too and see if I did post this pic; don't you hate when that happens???). I followed the pattern that I had written up for the first one so they should have turned out the same size. If anything the thread on the right one is bigger than the one on the left so shouldn't that make the doll bigger, not smaller? I just don't get it. 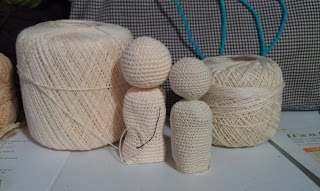 Last this morning I want to share with you two pics I took early Saturday morning before the storm system came through. I went to Wally World about 12 miles from home about 7:30ish and took these pics while driving. I know, I know...I shouldn't do that. BUT...there was no one else around me and I took them while watching the road hoping they would come out good. And they did. I love sky pics. They were taken one right after the other, not a minute apart. Obviously the first one is part of the second one. Cool huh? 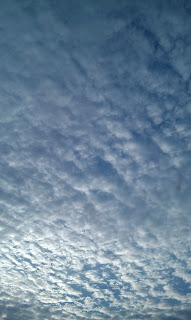 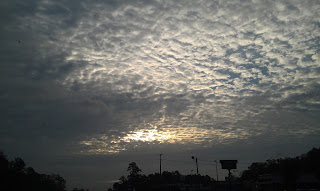 Well, my bloggy friends, time to do some catching up. I wish for you a wonderful Monday with a week full of warmy sunshine to follow! Cya soon!

TTFN
Kat
xoxo
Posted by Chain Stitch Crochet at 9:33 AM