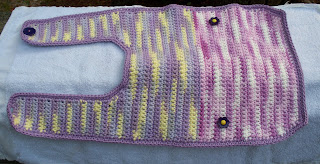 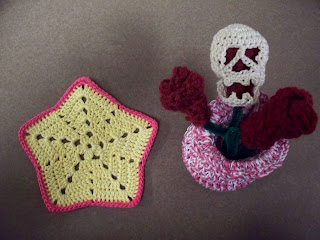 Brrrrrrr.....it's a tad chilly in GA today. The rains went through yesterday and now it's clear and cold. My heat was definitely on this morning. And it's supposed to be in the low 30's this weekend but I bet out at my place it'll be in the high 20's. And I still haven't brought in my plants yet....I don't know what I'm going to do. It's always colder out in the country than it is in the city. I'm amazed at the flucuation of temp from the city to the country. It's anywhere from 5 to 10 degrees difference.

I have started crocheting on a doll for Bella for Christmas. The head is done and I have stuffed it and moved on down to the shoulders. I had an idea, one of which I hadn't seen done on any of the dolls or amigurumi's. After I did the neck and started graduating out to the shoulders I did 3 sc in one stitch and when I got to the other side (directly across from it) I did another 3 sc in a stitch and just kept going with sc. After 3 or 4 rounds I had this hump on either side that when pushed out from the inside out looked just like regular shoulders! So then to even them out and keep on sc'ing the body, I came off of the shoulder and did a row of hdc over to the other shoulder, crocheted sc around that shoulder until I came back around and then did that row in hdc so that the row around was back even all the way around again. Has anyone done that do you know? I've looked at a lot of patterns and don't recall this happening in any of them. I meant to take a pic of it last night but it got late (7:30) and it was time for bed. But anyways, I crocheted the hdc as tight as I could so that the fill won't show, but I may try my hand at making some clothes for this doll.

That will be a first for me, making doll clothes. I wanted to try to put some breasts on her but I think that may be a bit too much. I think an easy dress will be the order of business as far as clothes go. But I am liking how she's turning out so far, even though she's not even half done.

I have also started (another wip) crocheting a motorcyle. I emailed Gudrun for her pattern and oh man....it's 26 pages, very detailed. Of course I started off with the tires as her pattern starts off and came to realize real quick how hard it is to work with black thread. I should have known because I have a hard time with black yarn too. I can only work on it so long and then I have to put it down because I get a headache squinting, trying to see the stitches. And that's underneath a light with my readers on. (Have I said before how I HATE growing old??) I am determined on this one though and after it's all done this is one project I am not giving away. It's going in my curio cabinet. :o) But check out some of her other stuff. This woman is a talented individual.

Well I guess I will sign off of here for now. Have a wonderful weekend where ever you may be!
TTFN
Kat xoxo

PS/Up top is a bib I made for a friend's grand baby and a little bit of my desk eye candy. I have quite a bit of hooky goodness around my desk area. One of these days I need to take a pic of all my desk eye candy.
Posted by Chain Stitch Crochet at 9:20 AM