Hey ya'll!!  Man how I missed everyone and their posts! And I learned something too. Some of the blogs I read are made so that you can't go back and see what you've missed. I never noticed that before. I guess because I usually check every day at least twice to see if there are new posts.  My loss....I guess I should check while I'm away from work huh?

Anyways....I was busy over the Thanksgiving week. First I was off all week and of course that went by way too fast.......for me anyways. I went to see the doc on Tuesday to get my blood work done. That went ok, but we dickered back and forth about my back. Do you know how regular docs don't like chiropractors? Holy cow. Well the xray I saw at the chiropractor looked nothing like the one I saw that my doc took on Tuesday. So tell me...where is all the pain coming from and why does it take three steps to straighten myself up after sitting for a bit crocheting. (And I had to laugh...I took crocheting with me while waiting on him. He walks in and gives me this look like I was doing something totally foreign. He said 'Crocheting???' I said 'Yea, I'm old...whatya want???' lol    Anyways....I guess he's going to refer me to a bone doc now. We'll see where this little trip takes us, and I'm betting it's somewhere I don't want to go. 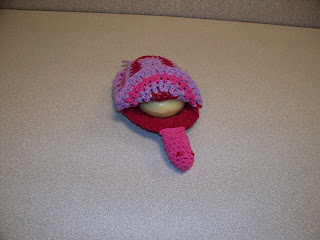 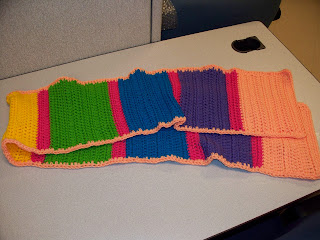 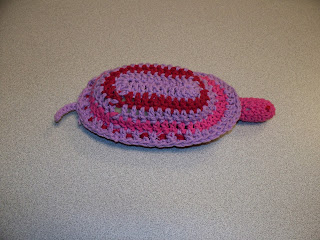 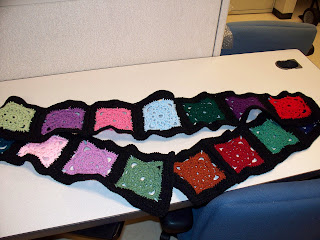 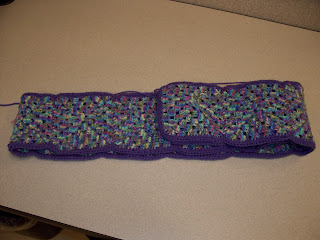 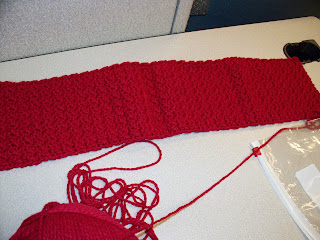 So I did quite a bit of hooking last week. And I'll be hooking my little fingers to the bone til I leave for FL for Christmas. But I not only did hooking, one day I raked and burned my whole yard (I paid for it the next day).  I baked some pumpkin bread pudding that turned out awesome!! I cleaned out, categorized and boxed up 500 books (my whole collection) to take the flea market, along with bags and bags of marbles. Do you know not one bag of marbles sold? So I will soon (probably after the first of the year) be putting marbles on Craig's List to sell. I did get rid of all of my books and some other odds and ends that I took to the flea market. I made my money back on the booth rental plus almost $100 so it was worth it, even though I busted my butt coming out of the back of my truck and was seen by a few peeps. How embarrassing. So much for my back huh???

Well...whatya think of my hookiness up above? I made a soap turtle all on my own, no pattern. I'm not thrilled about the color choices but I just went with it. I want to make more but I need to rethink the head. AND colors. :o)

And I guess you could say last week was a scarfy kind of week??? lol. The bright colored one was done in colors that I got in a large bag of yarn from a town garage sale for $5. It was a garbage bag full of yarn. It's crafted out of a row of sc, a row of hdc and a row of dc then start all over. I made this scarf for a friend that has a blue bike with peace signs all over it. I think she'll like it and it'll match her bike.

The black and multi colored motif scarf is for a friend that her birthday is December 23rd and she was heard saying recently that she never gets anything for her birthday because it's so close to Christmas. Well...she's got a surprise coming. :o) The motif's were taken from a shawl pattern that I can't recall and I would have to dig to find it. I made them quite a while back and stuffed them away. But she actually saw me working on them at that time because I took them with me on one of the runs we had. None of the motif's are the same color, even though in the pic two of the red ones look like they are, but they're not. I love this scarf....I hope she does too.

The next one - the multi colored surrounded with purple is another one that I made the grannies a long time ago and stuffed them away and pulled them out to make a scarf with. The purple brings the purple out in the squares but now I need another color to put shells around the outside and can't decide what color to use. I was thinking a sage green, because there's a smidgeon of sage green throughout the grannies. What do you think? Would that look dumb?

And the last one is made up of sc and dc in the same stitch, skip a stitch. Though I'm really po'd at myself. Somehow about 15 rows or so into it I dropped a stitch and can't figure out how and why it's not messed up except that you can see where I dropped it. I didn't notice it until I was almost to the point you see I'm at now. I hate when I do that!!!!!! Does that ever happen to you?  Sigh...........

So then I had to get back up and go to work on Monday. Mr. Lick Lick surely didn't like that but I can't help it. Gotta do what I gotta do. :o)

Anyways, I'm  happy to be back and I haven't totally caught up with everyone's blog yet but I will. I hope your Tuesday is fantastic!!
TTFN
Kat
xoxox
Posted by Chain Stitch Crochet at 2:01 PM