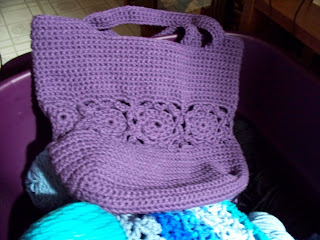 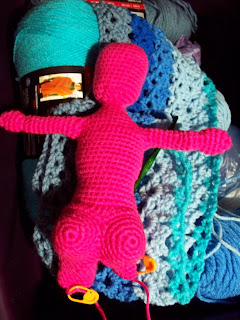 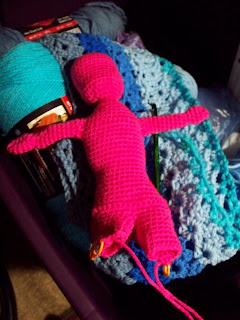 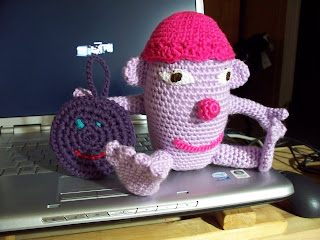 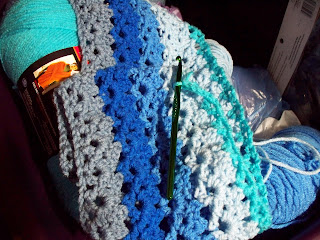 I am working on a ghan for my son. The pattern is from Pammy Sue's Good & Plenty. Mine is of the blue persuasion. It started out rumpelly but I think that was my fault. I tried to make the foundation chain loose but I guess I did a poor job of it. It's coming along slow but nice. I do at least a couple of rows a night. (I have to divide my hooky wip's up each night for variety)
I made a hat for Kylie's noggin. Actually I had just whipped one up and thought it could be for one of Bella's babies but discovered it fit Nellie Noggin perfect. :o) So it found a home. Whatcha think about Nellie's little smiley friend? I made that for my sister to put in with her birthday card when I sent it, but I changed my mind. I made her a little fishy instead and stupid me didn't get a pic of it before I sent it. Oh well.
And....don't laugh.......well ok, go ahead and laugh....look at the butt on that doll would ya??? I know the pic is bad but that was the best I could do last night. I have made this doll from scratch, no pattern, just me and my hands and trusty little hook and pink kid's yarn. I'm stuck with the legs right now. I'm bummed because one leg is smaller than the other. And I think I know why but I am NOT going to tear it back out. It's for Bella and she won't mind. Until she gets older and notices.....hey....why is that leg bigger than the other???? LOL. But I had a heck of a time from the butt to the legs. It shouldn't have been complicated but it was.
And last but not least.......the purse I made for Jen. I looked for the pattern last night....I must have stuck it somewhere because I couldn't find it. It's called a Flower Burst Bag. The yarn is Bernat worsted. I love the color, it's a dusty purple kinda. That may be the name of the color but I'm not sure. Thank you Yasmin for sharing this lovely pattern. I love it! I may make another one. It was pretty simple to make.

So it's Friday Eve!!! I'm hoping tomorrow is quiet here at work. This week has been a horrible, stressful week for me. I was about ready to lose it this morning but went out to lunch and came back feeling better for having gotten out in the world for a little while. I didn't need to spend the money on lunch but the renewing of my sanity made it worth it.
I hope your day was one of contentment and happiness. Here's to a million just like that! :o)
TTFN
Kat
xoxox
Posted by Chain Stitch Crochet at 1:55 PM