It's so much fun to go to baby showers. Especially when there's a baby there too! Well she wasn't a baby as in small baby but a little 2 year old was there who isn't into the terrible two's yet. I had so much fun with her. Her name is Payton and she is the kind of little girl that likes everyone and will go to anyone. That's good but also bad. And she loves the little cherry tomatoes. She ate almost all of the ones on the vegie tray. She didn't want cake, she wanted tomatoes. :o) I was surprised when she ate because she ate almost everything there was and not picky at all. It warms my heart to see that.

Anyways....I did get the dress done in time for the shower! I was ecstatic. I finished the buttons up the morning of.  There were three button holes but I decided to only put two buttons on it because the third one was really not needed. And I decided not to put the turqua on the border on the bottom. It made it too stiff with both colors on there so after getting it almost half way around the dress I frogged it. I was afraid that it had misshapened the pink but it turned out ok. 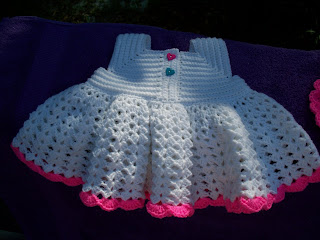 The lighting isn't the best. I had to take them outside Saturday morning and put them on a dark towel on the back deck. I was happy with the end result and everyone oohed and aahhed over them at the shower.

I also finished Terrayne's box with a flower on the top. I thought it was pretty. I need to make some more. They're just too cute aren't they? 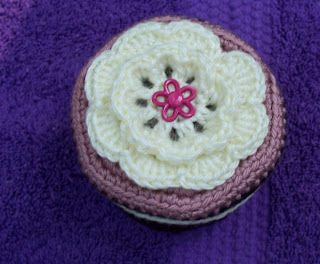 Yesterday was a quiet day. I stayed home and did laundry, cleaned a little bit of the shed out and took it out to the road and the garbage can (our garbage cans are very large and stay out at the road for the garbage men to pick up). I'm resolved to throwing out a bunch of stuff so I can get back in there and start doing my wood burning again. I'm missing that. It's a great stress reliever too.

I also finished my hearts for Warrior's Walk in Ft. Stewart for Memorial Weekend. I usually wait til the last minute for these but I figured since I had nothing else pressing at the moment I would go ahead and get them done so there would be no last minute stress. I'll take them to the meeting tonight to show the girls. I did them all different this time. I normally do them all the same.

In case you just joined me recently and don't know, we (Bomber Girls LRC) adopted 4 soldiers that lost their lives and have trees planted on Warrior's Walk in dedication to members of the 3rd ID of operations Iraqi Freedom and Enduring Freedom. We adopted these particular soldiers because we wanted to show love for our heroes and their trees didn't have much around them. A lot of the trees have little windchimes or other such things. It may be that these soldier's families live far away and are not able to visit their tree as much as they'd like. If you click on the Bomber Girl link above you can see the four soldiers that we adopted. We love them even though we never knew them. They are our heroes.

It's a somber occasion for me and I usually end up in tears thinking about them and how young they were to lose their life for me and everyone else. They paid the ultimate sacrifice for all of us. I am ever emotional when it comes to the military, be it the soldier or their families. 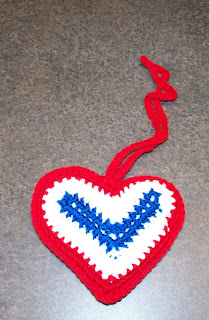 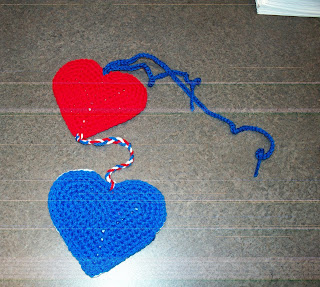 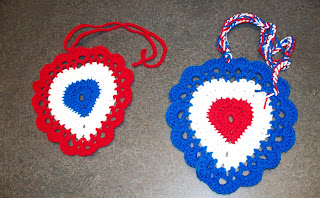 The top one is stuffed. I don't know how well that will hold up but I guess we're fixin to find out. :o) The second one is the one I had made before. The blue heart is white on the other side. And see the lines in the pic?? My dang camera is fixin to go. :o(  The last two were done with different hooks, same yarn. I used a G hook on the red trimmed one and an H hook on the blue trimmed one. None of these are my patterns but they are altered to suit me - fyi.

I also started a doily yesterday and was hoping to have it done to show you today but I have 2 rounds to go. It is also red, white and blue. I am on a rwb kick now. :o) But I love how it's turning out. It's really gorgeous. I can't wait to show you.

Well I best be getting to it here. I hope your day and week is the best it can be and that it exceeds your expectations. Much love to you.
TTFN
Kat
xoxox
Posted by Chain Stitch Crochet at 10:49 AM