Goodbyes are a hard pill to swallow. I don't like goodbyes, don't like saying it to tell you the truth.

I asked for tomorrow off from work, haven't yet received confirmation that I can take tomorrow off. I need to attend a funeral tomorrow afternoon of a man that was killed on his motorcycle on Tuesday. I don't want to go but I do want to go. I need to go but I don't need to go. Funerals leave me vulnerable and very emotional. I hate funerals but they are a vital part of grief and saying goodbye and it seems that they are happening much more frequently.

I've known Mr. Harry for quite a few years. He was only 65. He was part of CMA, Christian Motorcycle Association. He was a very nice man, very personable. He also sang and played guitar. He had a gospel group that played christian music and he wrote quite a few songs. I actually downloaded two of his songs yesterday so I could hear his voice again.

He was the kind of man that when you talked to him he made you feel good, made you feel like he was really listening and interested in what you had to say. And he made you feel like you were a very good friend, not just an acquaintance, each time he saw you. He is sadly missed by so many people. He touched a lot of people's lives in his lifetime and left a lot of people who loved him.  I saw him play a month or so ago at his church. That night keeps running through my head. One song sticks in my head and is one that I downloaded yesterday and the chorus line reads 'There ain't no Harleys in heaven Lord, but I still wanna go'.  Mr. Harry went doing what he loved doing, riding his bike on his way home from a religious retreat. May he rest in peace and may his family find comfort in the fact that he's where he wants to be.

I was going to do a post tomorrow to show you the red, white and blue doily I finished. If I can get off work I will be going to Mr. Harry's funeral tomorrow so I'll post it today.

It's only a 7" doily but I love the colors. Dummy me forgot the book that I got the pattern out of to show you but the pattern is called Snowflake. It's a real easy pattern and fairly quick to make. The pattern is one color but since I am on this rwb kick I estimated what rounds would be what colors and somehow I got it right so that it would look pretty good. Whatcha think? I was thinking of using a bigger hook and #3 thread and making another doily from this pattern. I don't know......I'll roll it around in my head for a bit. 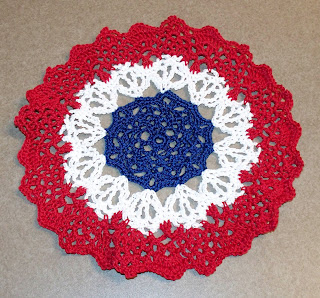 Also for those of you out there who are superstitious...tomorrow is Friday the 13th.  I'm not real superstitious and normally those days are good ones for me. Tomorrow won't though, it's going to be a very sad one for me and a lot of others.  I hope you have a good one and good weekend also.

Do you know what TTFN means? TaTaForNow. I don't like goodbyes.......
TTFN
Kat
xoxoxoxo
Posted by Chain Stitch Crochet at 8:12 AM