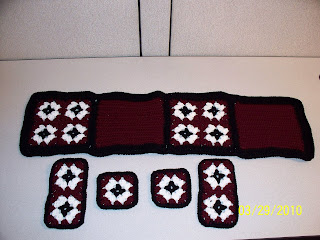 The dreaded Monday.....I hate them all. Especially when I wake up and my body is hurting so bad, I just want to stay in bed! And it was raining/storming this morning when I got up. All the more reason to stay in bed. Except that I have a job. Yuk. But I can't complain at all. At least I am lucky enough to have a job right now, the way the world is.

So anyways, I didn't do much yesterday. I did manage to fix my hose, though it took me a few times but I mostly licked it. Except that I saw later in the day that it was still leaking, but not near what it was after I fixed it the first time. And then I buried the hose underneath the gate so that I wouldn't drive over it anymore and mess it up. And I wondered while I was doing that, why did I not do this years ago??? DUH....... lol. But I'm glad now that it's done. Mr. Lick Lick was getting in trouble while I was busy doing this. He was in the shed being his nosy little self, sniffing everything he could get his nose to. I was in the shed one time and he was up on something underneath my bench and almost hurt himself and made stuff come crashing down. I told him to GET OUT! Well Mr. Lick Lick does not listen, at least not when your back is turned. He went straight away back to the same place, to do more sniffing that he didn't get to do earlier and crash...again. Oh I was mad at him. I was more worried that he was going to get hurt, than to hurt anything in there. Plus I was worried that maybe a snake (rattlesnake or copperhead)was hiding in there somewhere amongst the stuff and would get him. I can't lose him now, not so close after putting Pee down. I couldn't stand it!!

I did get my laundry done and I managed to do a lot of hookin!! I finished up a WIP for a co-worker in FL and it looked great! That's it up top there. It's a table runner and coasters or whatever she wants to do with them. I had started it out as a bag made of granny squares....those particular squares. I had it mostly together and just did not like the way it looked so I took it apart and made this. I hope she likes it!

I also made an amigurumi strawberry, a parasol from pastel #10 thread(which I neglected to take a pic of) that I was so delighted with, a bookmark for one of my grand nieces that is coming south in a few weeks and I started on a granny square doily for my older sister who will be with my niece and grand nieces(3) all coming south. I am making all of the grand nieces bookmarks and my sister and niece doilies. I will take pics when I am done. And I'd also like to get some starch to stiffen my parasol.

I also decided to stop the WIP I had started for my youngest sister. I so did not want to work on that piece anymore and put it up to do something else with later. I think I'm going to start a new afghan for her in the same colors but in the ripple sense. I have not done ripple before so I started a swatch to see how well and quick it goes. I like it! I can't wait to get that project started.

Well I best quit for now. Have a wonderful day, where you may be.

TTFN
K xoxox
Posted by Chain Stitch Crochet at 8:56 AM