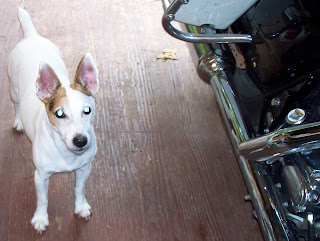 Oh, it's almost time for playing hooky! Crocheting that is. :o)

I finished the placemats and I even made ties to go on them! I don't have time to post the pics now, I'll have to do it tomorrow. Plus my camera batteries are not good enough to download the pics but I think you'll like them. I love them! I would love to get something like this for a wedding present! I also had a little bit of yarn left to make this thingy, don't know what you would call it but it's a tie with a flower at the end of it and it ties up the envelope instead of licking the licky yuck! (I don't even think Mr. Lick Lick would like it.....matter of fact I know he wouldn't!) I was so pleased with myself! And I haven't seen another one like it, not to say there isn't one, but I have been scouring the net for patterns and haven't seen anything close to it. I can't wait to get the pics posted for you!

I need to post a pic of Mr. Lick Lick don't I? Oh...let me look right now for one. There's my Mr. Lick Lick! His real name is Leo, named after Leon Russell but with the n left off, obviously. Leo was my dogs, PeeWee and Misty, son. I had to put down Misty in 07 because of cancer and I just recently (three weeks ago) put down Pee. I am still in mourning over him......I miss him terribly. But anyways....Leo is going to be 12, oh Lord...next Tuesday! Leo belonged to my best friend, Jeff, who passed away at the early age of 46 in September of 08, and I inherited Leo. He was the only pup of my P&M that I got to see grow up and knew his whole life. And now he is mine again. I don't know what I would do without my little lick lick now that Pee is gone. I so don't want to think about when Leo has to leave me, so I'm not going to.
Anyways...Mr. Lick Lick lays next to me when I'm hookin. He interrupts me when I'm hookin. He steps on my yarn when I'm hookin. But I still love him.
So...now that my wedding project is done I started working again on my plum hat that used to be two slippers. I was so bummed. The day I put Pee down I started a pair of slippers, just for me! I followed this great pattern and actually had them both finished that day (I hooked with a vengence that day) except for the heels (have I told you that I HATE heels and I cannot hook them?) and I tried them on and they both did not fit! Even though I had every so often tried them on as I went and they did fit!! What's up with that??? So I pulled them apart and left the yarn for a few days. I started a hat after and I've picked it up a few times and put it back down. But now I think I will be finishing it in the next day or so. I can't wait. The first thing I have hooked for myself! (I'll probably end up giving it away.....)
So.......where ever you are I hope it's all good. C U soon! K xoxox
ps/that's my bike next to Leo..... :o) just in case you were wondering.