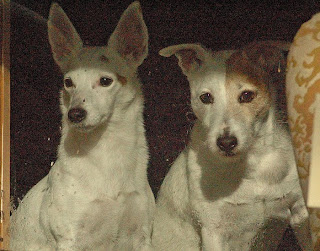 I was thinking that although I introduced you to Mr. Lick Lick, that maybe I should show you where he came from. And that would be my precious babies that I had from the time they were babies to the ages of 10 and almost 14 respectively - Misty & PeeWee. Misty is on the left, Pee on the right.

Misty was such a sweet little girl that everyone loved. She played and occupied herself, loved chasing squirrels and lizards and was the joy of my life. She made me laugh so much. When she got cancer in her left rear leg I had it amputated because I couldn't bear the thought of putting her down. She was 8 then. A year and a half later she got it in her left front leg and I had no choice. That killed me......and Pee. He was her husband and they had been together since she was a baby. I had him first.

He was a little bull in a china shop. My little man was a demanding little cuss that would play games on me when we moved to Georgia. He'd come to the door and want in and when I would get up to let him in he would run off the porch! Such a trickster he was. And he was very stubborn, especially in his old age. He was definitely a creature of habit and you didn't violate 'PeeWee time'. LOL

Oh how I miss him, I miss them both. But his departure is so recent that I cannot bring myself to finish his grave out there. It's killing me. I can't even think about it without tears rolling. It's just too raw for me to deal with yet.

I thought it would bother Leo badly and that I would go through another bad time with him, like I did with Pee when I put Misty down. Oh Pee made my life hell for the first 3 or 4 months after I put her down. Who could blame him...after all....after 10 years of marriage his wife was all of a sudden gone and he had no idea where, why or if she was ever coming back. You certainly can't explain it to him......well, I tried, but he couldn't understand. But back to Leo, he hasn't taken it near as hard as I have, for you see, he was with Jeff all those years by himself and he was used to the one on one and so when Pee was gone it was weird for a couple of days....where'd he go, I know he was just here....I still smell him...but he's not in his usual spot on the couch...darndest thing......oh well.......I have her to myself now!!!

And the little booger loves me like no tomorrow and I love him too, but my Pee was with me for almost 14 years, was here every day when I got home, loved me no matter what, slept with me and kept me warmy on the cold winter nights. I miss him so much.

This pic is the essence of both of them. She was looking for anything that could move, and he was looking dead at the photographer wondering what he was up to and was he going to let him out so that he could greet him in a right proper fashion.
Mr. Lick Lick is the son of Miss Lick Lick. LOL...she had him beat by a mile. But it's so funny to see how much he takes after his mama. He has a lot of his daddie's traits in him but he's almost cut from her cloth. It's almost like I have my girly back.
Anyways...I just thought you might like to see my babes. My fur babes. May they be together again at Rainbow Bridge and waiting on me and Leo to show up.
Nighty night.....sleep tight.....