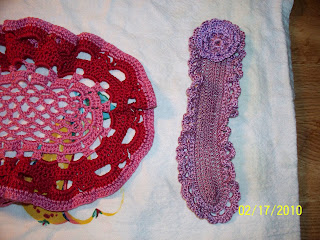 Hey ya'll! Well, this is the start of my newest (I've changed it several times) blog - hence the subject Telescopic Tuesday....you'll have to come back for a visit to see further down the pike! I know...that's kind of a stupid humor but that's me. Like me or leave me....lol.

Anyways....so let me introduce myself.....I am Kat....I live in the great state of GA, close to Savannah but not in Savannah, with my last fur baby, Leo, kindly referred to as Mr. Lick Lick. I am a 50 something grandmother of two darling girls in FL - I ride a Road King Harley Davidson - I love woodworking and woodburning, and I have just gotten back into crochet with a vengence. I taught myself to crochet in the last ten years, put it down, then picked it back up and haven't quit. I crochet on a daily basis, whether it's a little or a lot. Depends on what I'm working on and the time constraints on it.
Like right now I am finishing up some placemats (along with hotpads, dish clothes, scrubby) for a friend who is getting married Saturday. I will post pics when I finish them up in the next day or two. The little stuff is done, I'm just finishing the border on the placemats. 2 of 4 are totally done, I have one side of the 3rd to go and the whole border of the 4th. I used 4 different ombre colors of the Peaches and Creme - some kind of green, strawberry creme, sunburst & sherbet. I crocheted them with an F hook and the stitch was a 'crossed double' crochet. I used a pattern I found online (I'll have to do the credit later because at the moment I can't remember whose it was). The border is not the border that was in the pattern, because with using a different hook the guage was not according to pattern. The reason being that the pattern called for '2 balls' of a different brand and I didn't know if I would have enough of the Peaches and Creme for the stated size (bigger than mine turned out) so I went with the next smaller hook to make sure that I would have enough yarn. Turned out I did have enough and had a little of each color left over so I made dishclothes of white with a stripe of the leftover color.
I do that a lot.....I'll take a pattern that I love and I think that's do-able, and either change the hook size or yarn or thread and what ever other changes I fancy. I don't think I've ever completed anything according to pattern specs. Mostly because I've printed out a lot of patterns, start them and then got through to some point where there is a mistake or something missing and I get frustrated and stop and either try to figure it out or completely pull it apart......mad that I can't do it. My header pic above is a combination of two patterns (and can someone tell me how in the world to make it smaller?? It's soooo big!!) . You see.....I lied in the previous paragraph and just now realized it!! The hotpad pattern is the one on the back of the Peaches and Creme band around the yarn...verbatim. But now, the motorcycle wheel is my own pattern....or at least in my mind it is because I sat there and did it myself without a printed pattern. If someone else has done this exactly as mine and written a pattern I apologize but had no prior knowledge. I did, however, write it down but don't have it handy at this moment in time. I will post it later. See the pic above? I made these both (no pattern - sorry) for a friend of mine, Paulette, for her birthday. The purply thing is a bookmark with a flower at the top. The doily I call a RedPin Doily.....because it's red & pink. :o) The doily I had started as a snood and decided one day I wanted to make a doily out of it. I like the red and pink combination together.
So anyways......hope you have a wonderful day! Mr. Lick Lick says RUFFRUFF ......K
edited to add - the placemat pattern is Coats & Clark pattern designed by Marilyn Coleman.