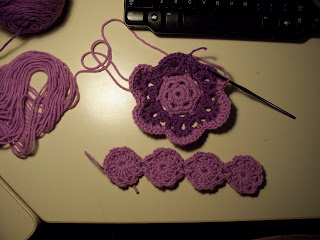 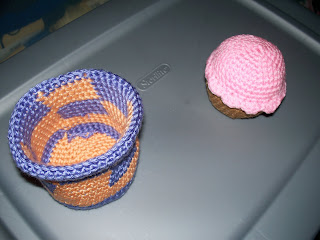 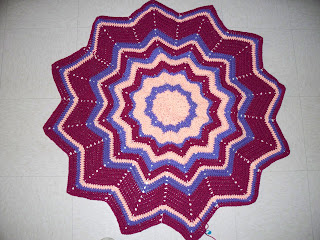 Ahhhh.....finally it's nice weather. Cooly in the mornings, nice breeze and warm, not HOT during the day. I actually had my door open yesterday because it was cooler outside than it was in the house! It's going to be a wonderful nice weekend too. :o)

So anyways...some of my hooky goodness that I've been dabbling in, I just had to show you. Bella's blankie is getting there slow but sure, but I think more slow than sure. After putting it on the floor to snap a pic of I think I like the colors and how I've placed them. Now I just need to finish it.

The basket I made one night and morning for one of my Bomber Girl sister's boyfriend. He is so nice. He gave me a purple harness for Leo and one of those thingys you hook into the seat belt of your car so that the dog isn't all over the place. Leo hates me for that, let me tell you. I tried it on him. He would stand next to me but when I went to pet him he moved to the passenger side of the car. As if to punish me for doing that to him. Well.....I have to go to FL in December and to have to ride 6 hours with him wanting on my lap was not my idea of fun. Now Mike has made it possible for me to relax a little bit and not worry about having to try to restrain Leo the whole way. So I made the basket for him and I gave his mom (who I had just met and she was from close to where I was born - it's such a small world) the cupcake pincushion I had in my done stash. She makes quilts. She was really nice too.

And last but not least - I started on the Kaleidoscope Blossom by Terri Simon and was happy with how it was turning out......that is.....until I discovered that the flat part was BACKWARDS!!!! Oh I was so mad at myself. So after I discovered it I dropped it and left it for when I feel like picking it back up and tearing it apart...oh 3 or 4 rows...to fix it. And the yoyo's in the pic are I think Teresa Richardson's??? of how to join yoyo's. I'll have to look again when I get home. I could be mistaken. I can't remember sh** anymore.........errrr sorry......but it's true.

So anyways....hope your weekend is very comfortable and good. See ya next time! :o)
TTFN
Kat
xoxox

PS/I won a mandala from Pammy Sue's giveaway! How cool is that?? Red, white and blue - patriotic. Thank you Pammy Sue...it will definitely be loved!