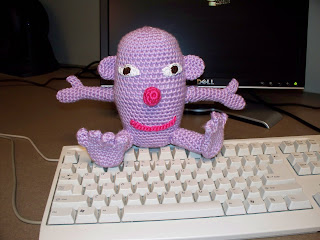 Well....I finished my noggin, but she's not according to pattern 100%. That's mostly due to I am not a sewer (not sue-er - it's so-er) lol. I had the most difficult time putting the feet, legs and arms on. The ears were relatively easy compared to the others. I made my own eyes, which I wrote down how I made them, but when I sewed them on they took on a shape of their own. And the nose was ok and the mouth is a 'remake'. All in all she's not bad. Kylie will love her because - a)motorcycle granny made her
b)she is of the purple species
c)she has pink on her

They looked great before I sewed them on the noggin. Oh well.

Don't forget Paula's giveaway Confessions of a Crochet Pattern Slut . She's got some great stuff! (I know, I've been a swap partner with her!!)

Hope your Tuesday has been wonderful and that wonderful will continue on to tomorrow!!
TTFN
Kat
xoxo
PS/I forgot to say that I put the arms like that because I'm going to send a note on the noggin that says "I Love you thissssssss much!!"
Posted by Chain Stitch Crochet at 1:50 PM