So There I Was 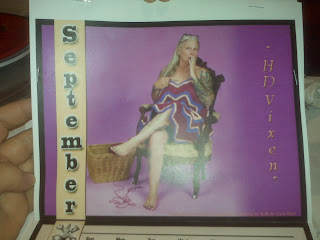 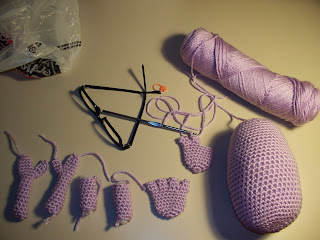 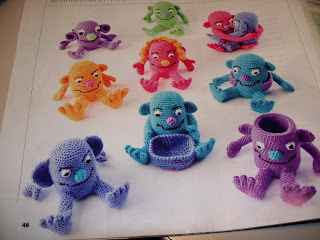 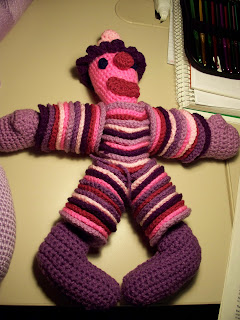 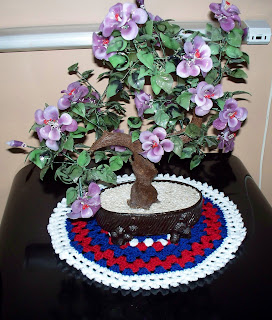 Don't you hate when something starts out like that? It grabs your attention and you just have to read what follows. :o)

Look what I won from Miss Pammy Sue's giveaway!! It's a gorgeous mandala! Besides being patriotic, the color of red that she used is a little deeper than the normal red and I just love it! For now it's under my porcelain tree until I make a new home for it. (I have two spare rooms that need to be cleaned out so I can bring my plants in for the winter. ) Thank you Miss Pammy...it's very much loved!!

I am currently working on a Noggin from the latest Crochet! magazine. I'm not sure how I feel about it. The body doesn't look near like the pics in the magazine, but it's not all done and put together either. I've not had a problem with it until I reached those dreaded toes. Holy cow...the first foot was so aggravating I didn't even work on the second foot last night. I picked up something else to work on. So I started on the other foot today and it's laying here on my desk with only two toes done. Two more to go. :o) Then all I have to do is the ears, nose, eyes and pocket and put it all together. The ones in the book are made with Caron Simply Soft Brights. I had a skein of Lilac Bud Caron Simply Soft Eco. She will be for Kylie for Christmas, as she loves anything purple. I'm sure I'll have her done by the end of the weekend so I can take a finished pic and post it next week for you to see. But you can see what I have done so far.


I also pulled out Kylie's clown because I had to finish weaving a couple of ends and I wanted to tack down the legs and arms to the body. You would have thought I'd done all that before putting it away until time to send but I must admit....I was lazy. :o( Anyways, I got the pattern for the clown from Enfys on Ravelry. Although I just checked out a book from the library that has a similar clown pattern in it. That one doesn't have the head and feet that this one has. Same principle on putting it all together though.
Last but not least, I am a pinup girl!! :o) The pic you see is me, (Miss September) with Bella's blankie that I have been working on. And although I appear nekked, I am not. I have shorts and top with my straps pulled down behind the blankie. We (Bomber Girls) put together a calendar for sale as a fundraiser to send packages to the troops. Some of the calendars will go in some of the boxes to the 60 soldiers currently being sent packages. And normally I am NOT photogenic, but this photo of me turned out rather well I think. And Shirley of Fancy Pants Photography did a wonderful job and a big thank you to her for donating her time to put up with us girlys and taking our pics. She was so easy to work with.....I hope we were just as easy for her to work with.
So it tis the weekend. I hope where ever you are that your weekend matches no other and is wonderful beyond your dreams!!
TTFN
Kat
xoxox
Posted by Chain Stitch Crochet at 1:35 PM