Yes, it is so dang cold here today! That front that kicked the midwest & eastern US's butt yesterday came through and now it's clear and bite-your-butt cold. It's probably in the 40's with a colder wind chill. It's terrible windy out there. At 5 this morning on my front porch it was about 25 degrees. And I know it had to get colder right before the sun came up. Brrrrr.

I was somewhat upset this morning. My car last week blew the power steering pump. So I got another one and got my neighbor to put it on for me, as he mechanics for a living. Well........he put it on, brought it back to me and we took a ride to the bank. It made noises several times and we put more fluid in it each time. So I got another bottle just to be sure there isn't any more air in the lines. I get started to work and it starts making noise again. So I stop at the police sub station so that I can see what I'm doing to put fluid in. I go about 7 blocks and stop at another store to put more in and use up what I have. So I get another pint of fluid. I get going and quickly conjure up in my head the straightest way to work without making turns and go that way. I get almost to work and it starts again. So I stop again and put fluid in it. Something is not right. I get to work and at 8 call a repair place not far from work that I have picked up one of my co-workers from before. I take it there and have to stop again and put the last of the fluid in the bottle I just bought just to get there. I get there, get out of my car and there is fluid all on the back of my car (not to mention the large puddle when I got back to work). Obviously I have a MAJOR malfunction that I'm not at all pleased about.

They still haven't called me and I'm getting a bit worried. I live almost 40 miles from work and none of my co-workers live out that way. UGH

So anyway.......to take my mind off of it.....we drew names Friday for presents here at work and I drew a girl in sales' name. I had a pattern in mind so I went home and worked 10 hours throughout the weekend on this scarf. It turned out lovely. It's not totally to pattern but mostly. It's Red Heart LW1471. I've made several of the hats in the pattern. I wanted to make the scarf, but didn't know it would take so long to make it. It was worth it though, it turned out pretty. 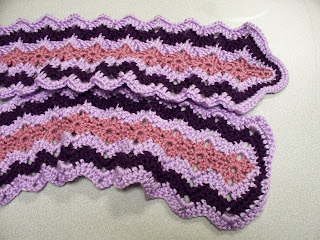 The difference in the ends is mind boggling to me but I followed the pattern on the first two rows and then went with it after that. The flat end is what shows in the pic. I kind of like the other end to tell you the truth. But it is what it is. :o) One of a kind, that's for sure. I hope she'll like it.

Hope you are comfy, cozy, warmy today where ever you may be.
TTFN
Kat
xoxo
Posted by Chain Stitch Crochet at 2:50 PM