It's a very good thing I don't own a chocolate shop.....I would eat all of my profits. And weigh too big to come in and out the door. I am a confirmed choco-holic. I cannot walk by chocolate without consuming some if it's there for the taking.

My ex-boss had a visitor from Austria just recently and brought me some Austrian delights. One was like a Kit-Kat, I guess you'd say. This is it from beginning to end: 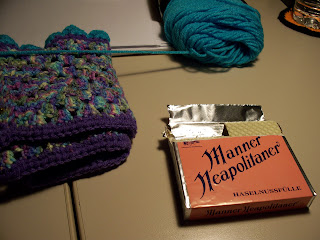 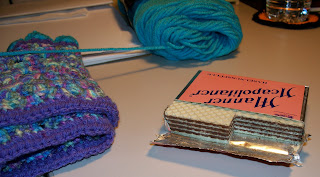 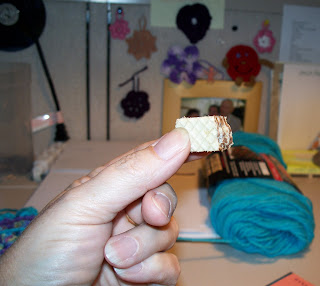 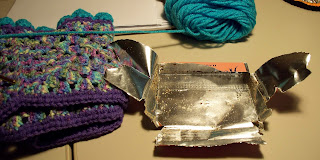 Notice the hooky goodness in the pic? I scrapped it as a gift for this year. It'll be in my wip box until later, which is kinda dumb because I only lack the edging finished on it. But I changed my mind on who it was to go to and made her a hat instead. So now I have an almost finished scarf for someone else, later on. Suits me.

Ok...need to get back to it here. I have sent out a couple of pkgs. to my favorite blog peeps, plus to two angels. Nothing big, just little tokens of love. Tis the season!
TTFN
Kat
xoxox

PS/Remember my car steering pump went? Well...$353 later....the pressure line side of it that is made up of thin metal got a hole in it. The part was $70.......the rest was labor. :o(  Last night I did a load of wash...my dryer went. Well...specifically I think the heating element went. I can't win for losing. And don't say it....I'm not going to even think it. Anyways...I had three pairs of jeans in the wash (amongst other stuff I hung on hangers to dry)...I put them out on the clothes line and when I got them off at 5 this morning they were board stiff. Literally. It was 14 degrees this morning.
Posted by Chain Stitch Crochet at 11:02 AM