Happy Monday ya'll!  I hope you had a great weekend. I mowed my yard on Saturday because the grass was so high (what little bit of grass I have).  I've been hearing a lot of incidents of rattlesnakes and copperheads this year, and it's mostly due to the fact of it being so dry and they are looking for water. With high grass you cannot see snakes. I have been praying Leo wouldn't run into any. He can survive a copperhead bite but not a rattlesnake. So I thought I best get out there and get the grass mowed so at least I can see in the yard if one is lurking about. Although.....my friend had a rather large copperhead just inches away from her in the leaves and she said she could not see him until he moved. SCARY!! I hate snakes! Below is a pic of the road I live on.....can you see why there might be snakeys in my neck of the woods??? 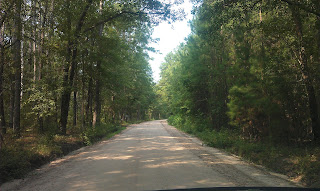 So after that I was ruined for the whole weekend! I thought since I was going to be stuck in the house I might as well crochet huh? (Like I need an excuse! ;o) ) I really wanted to get Gail's bookmarks done so I could get them to her. The first one I showed you on Friday went really quick. The second one seemed like it drug on and I was getting bored with it. The third one yesterday went really quick because I soooo wanted to be done with them!!

I have done the duck/chicken one before, the clown I have not, that's my own design/pattern with parts that are other's patterns, as I stated before. I'm not real happy with the mouth part but it's done. (Don't look too closely at it!) And I am totally mystified at something. When I switched to all red for the bottom of the bookmark I kept the same amount of stitches and the same hook and thread. The bottom of it grew! A quarter of an inch!! I measured it and I kept counting my stitches just to be sure I hadn't added one in  somewhere, somehow. The only thing I can think is that my tension eased up because I was no longer carrying the yellow with it.  It's hard to see because the bottom wants to curl, but trust me, it grew. Oh well.  I hope she likes them. 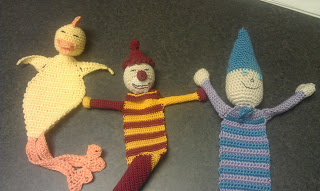 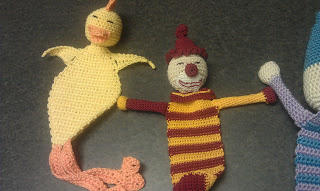 They're all doing the happy dance because I'm done! lol  They will be on their way to her today.

So that's all on the crochet front for me. I don't know what I will attempt to tackle when I get home today but rest assured....I have plenty!  Actually I need to sit down and make a list out of what I have done, what's in progress and what I need to start for Christmas.  I think I have most of it either started or done. Just need to make sure.  I hate to say it but it's really just right around the corner!  Time is flying so quick.

So here's hoping your Monday is wonderful and that the rest of the week will follow it's lead!! Cya soon!
TTFN
Kat
xoxox

Posted by Chain Stitch Crochet at 7:40 AM