My Weekend & The Introduction to Madge

Good morning! I was so glad to hear that Irene was not as bad as what was feared. She could have been a whole lot worse. We did get a little bit of her but nothing compared to those north of here. Friday was actually a cooler day because of Irene. We had cloud cover all day and some rain but not much.

Saturday was clear and hot here. I was going to help work a stop for a poker run but ended up being left behind because I had a rear flat tire on my motorcycle. About 3 miles before the start of the run I noticed that my back end (bike) was feeling kind of squishy. I knew something was up. I stopped for a red light at I-95 and when I braked for the light my rear end fish tailed a little bit. I thought...oh no...not a flat tire.  Yep....when I took off from the light I knew exactly what it was. I still had another mile and a half to get to where the run started, a bike shop, and had to go slow because my back end was all over my lane. But wouldn't you know it...they had sold the last tire my size the day before. So they called around. Two shops had my tire so I went with the cheapest one. And the shop where I was at had no mechanic that day. My luck. So one of my BG sisters offered for her boyfriend to put it on if the shop didn't mind him using their facilities to put it on. They didn't so he was kind enough to help me out. It could have been worse, I could have wrecked, but when you've got as many miles as I do underneath you on a bike you know when something isn't right and do the best you can to get yourself to someplace close by to get help.  $185 later and the help of a great friend using part of their Saturday to help me out......I'm a lucky girl. The tire on my rear was in very good shape, except for the gash inside the tread. I had seen a piece of glass too late and hoped I didn't catch it in my tire. In that respect I was not lucky. It was gashed good enough that there was no fixing it for a spare. Doodoo happens.

So let me introduce you to Madge, Kylie's next best friend. :o) Crochet wise that is. I still have her face to finish and earrings and necklace but wanted to show her to you anyways. A couple of people have said they like her without a face. But I don't think a 7/8 year old can understand why a doll doesn't have a face. :o)  I also want to make her a few more pieces of clothing too. The patterns both said the doll would end up being 16 inches and I fell an inch short, not sure why or how that happened. I went according to pattern for her head, torso and legs. And I went with a different hair style than the other two patterns called for.  That was interesting. My left hand started cramping doing the curls so I had to stop for a while then go back to do the last two. Over all I'm pretty pleased with her. So without further ado..........meet Madge. 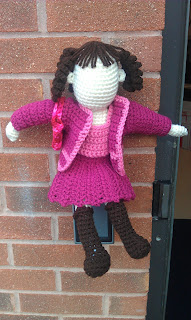 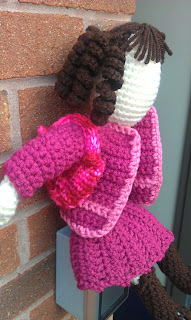 I think she's cute. And I hope her face turns out good. I fret over that. I'm not good with faces. They always end up looking mad. lol.

I so hope this week goes by quick. I'm ready for the 3 day weekend. I have lots of yard stuff to do this coming weekend so I hope it'll be cloudy so it won't be so hot out. Wow...lots of so's in the last two sentences. :o)

May your day and week be more than you hoped it would be with lots of love and laughs in abundance. Cya soon!
TTFN
Kat
xoxo

Posted by Chain Stitch Crochet at 9:15 AM