Gee...I posted last Tuesday also. It's a tad slow for a minute or two. :o)

The heat is being relentless. Though we finally managed to get some rain but it went straight back to hot again. I think I've had about 5 inches (4 in one afternoon) at the house. Any little bit helps. :o) And now they're saying that tropical storm is heading this way. I hope where ever it goes that we only get the rain out of it, no bad winds or destruction.

I finished the gloves except for the embellishments and I'm trying to decide what color to go with on them, and also I'm going to change it from what the pattern calls for on the leaves. The flower might stay the same. 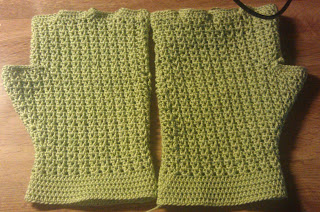 The pattern is very easy (at least for me). Although in looking at this pic why is one glove straight in the rows up and down and the other slanted??? Hmm.  I just noticed that. They are big on me so I will have to come down a hook or two on the next pair. I was also thinking about using #10 thread and keeping the same #4 hook and see what I come out with.

My sister texted me the other night and asked me what I was doing. I told her crocheting ^^^^ some gloves.  She asked if I would make her another book mark like I made her before because when she went to CA on business someone stole it!!  That sux. I asked her why she didn't ask me before...it's been about 6 months since she went to CA. She thought that just maybe it ended up in the bottom of her bag but she finally cleaned the bag out, after throwing it in the closet, and it wasn't there. She also asked me to make a couple that she could give as presents, so I said I would. The pic below was yesterday before I finished the hat on it. I couldn't get a pic of the finished hat because my phone was being charged. (My smart phone takes awesome pics...better than my camera did!) 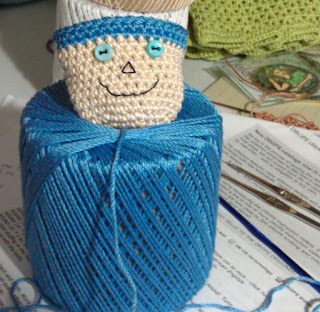 Here's a bad shot of the one I made for her previously: 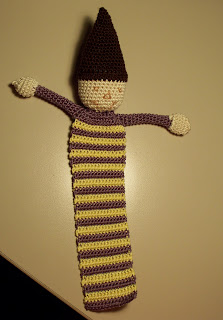 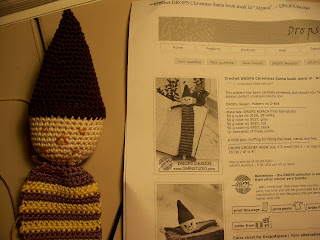 So I'm thinking that the difference between the old one and the new one shows how much better I am at faces. :o)  I like the Drops Design bookmarks. I can't wait until all three are done. I will probably do a chicken and bunny, or a frog. Haven't decided yet.

So that's what's going on with me hooky wise at the moment. I hope your Tuesday is everything you wanted when you started your day. Try to keep cool! Cya soon!
TTFN
Kat
xoxo
Posted by Chain Stitch Crochet at 2:28 PM