The lighting on the burgundy and pink December doily didn't turn out very well. But that lighter color is pink. I used #10 burgundy and #10 pink and a #4 hook. I finished it up last night and still had time to work on the Rising Sun doily. Which I might add that I think will go rather quick now. I'm on round 11. I'll work on it every night and this weekend until it's done. 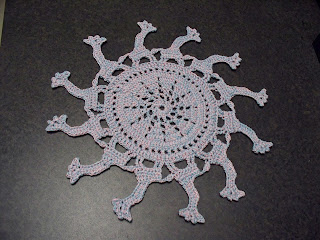 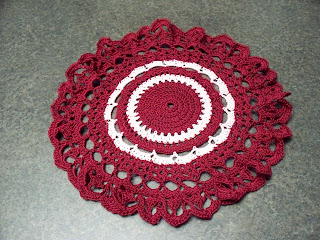 I blocked the giraffe coaster but not the doily. I rather like the doily not blocked I think. The giraffe coaster I had to because all of the heads were twisted because of the stitches on the heads. Like I told you before, I had started on this coaster a long time ago because I liked the look of it and it was challenging. But after I got the first two giraffes done I put it down. I'm so glad it's done. Nothing like getting a wip done that you've had laying around for awhile. :o)

Yesterday on the way home from work I tried to get some pics of the pond I told you about......only I didn't stop, I tried to take them while driving. I don't recommend doing that, but I've done it before successfully. These didn't turn out the best. I may stop this afternoon and get a couple. I hope there are ducks and geese there. I didn't see any yesterday because I was too busy trying to drive and get pics at the same time. I think the person behind me was a little perturbed because I slowed down a bit. See how dang close they are?? And we were doing over the speed limit too! 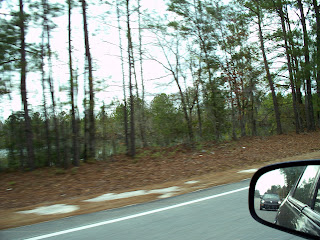 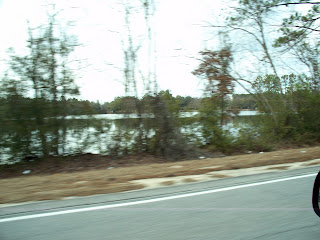 The first one is actually where the break between the two ponds is but it's hard to see because of moving. The second one is the second pond.
I hope your Friday eve is everything you want it to be. It's supposed to get up to 72 today here. Hang in there my northern blogettes......spring is on it's way. Before you know it it'll be hot as the dickens!
TTFN
Kat
xoxo
Posted by Chain Stitch Crochet at 8:17 AM