Tip Toe, Through The Tulips

Can't you just hear Tiny Tim singing that? Is he still living? Hmmmm.

Anyways....I had never seen these before nor heard of the tulip tree, bush, whatever you want to call it, before I moved to GA.  And to tell you the truth, yesterday afternoon on the way out to go home was the very first time I got up close and personal with them. They smell heavenly! I didn't know they had a smell. But they are gorgeous and they don't last that long before leaves come out. I'm surprised the pics turned out as good as they did because the wind was blowing. I stopped on the way back in from lunch just now to get a pic of the whole bush in bloom. 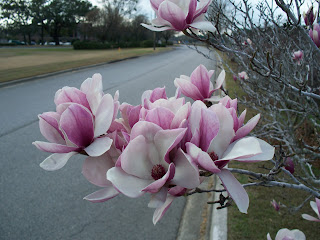 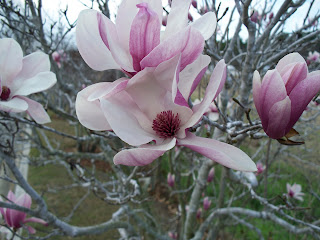 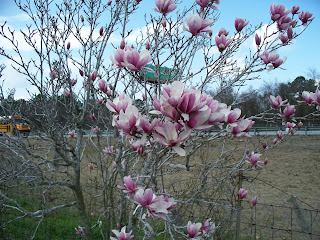 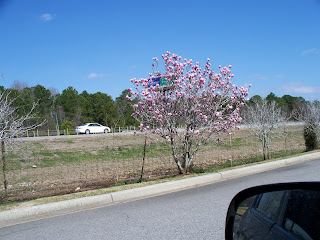 Also here we have these trees called Bradford Pear. They don't produce pears. But the blooms in the spring are very pretty. These are just now budding out. By Friday they should be totally budded out. I'll try to get a pic of them then.  They don't smell real good. My older sister thinks they smell like 'peepee diapers'. Yuk 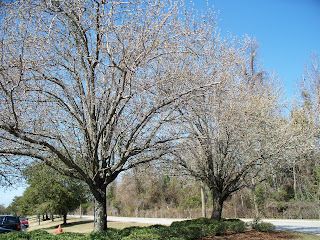 And I don't know if I've posted pics of these before. But I wanted to get a couple of pics of them before the tree was full of leaves so that you could see. I got a far away shot and a closer up shot. Can you guess what the green things in the tree are? I won't say until my next post. I'm sure some of you know. I didn't know this either until I moved here. Moving to GA was definitely a learning experience all the way around.  :o) 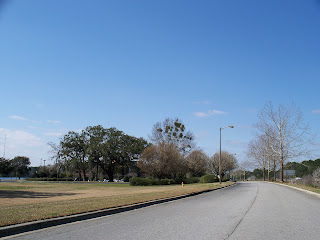 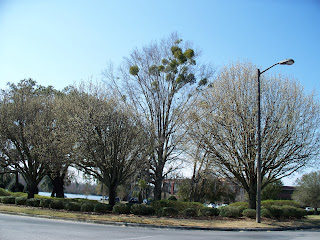 And I had something scary happen to me last night. Little things 'come up missing'. You know....like you put so & so here so that you won't forget and not lose it, then when you go to get it, it's not where you thought it was. Well, Monday I got a new charcoal grill because mine is falling apart. I also had bought some pork ribs and was going to grill them out when I got home yesterday afternoon from work.  I was going to do it Monday but it got too late to do it. So I get the grill going and go in the house and was going to get the ribs ready to put out there. I walked in the kitchen and they were gone. 'I knew I had taken them out of the fridge to get ready.'  So I stood there for a minute trying to remember what I did with them. I couldn't remember. So then I retraced my steps from the time I walked in the door from work. No ribs.  For 10 minutes I searched for where I had obviously laid them down. No where were they. Now I'm starting to look at Mr. Lick Lick because he's been following me from room to room and he's like......what??? I didn't touch them!!!  So I said to myself, well maybe I really didn't take them out of the fridge and I thought I did. So I looked in the fridge. Nope, no ribs.   Ok now...I'm starting to get upset over some stupid ribs. I could have sworn I took them out of the fridge and laid them down. Just for the hell of it I opened up the freezer, after all...it was the last place that I hadn't looked for them. There were the damn ribs. Frozen.  It hit me just then that I had put them in there the day before when I realized it had gotten too late to grill them out and I wasn't sure when I would get to grill them.   Am I getting alzheimers? Is it dementia? Or am I just getting loony tune? I'm losing it. I'm only 54. I can't tell you how scared I was when I realized that I never took them out of the fridge. It was so real........seriously.   I now wonder if I need to start writing things down in a binder notebook that stays with my crochet stuff in my little corner. Like daily occurences like this, and where I put stuff that I don't want to lose because I know when I go to find it, it won't be where I thought I put it.  Kind of like a diary of how I'm slowly losing my mind and the progression of it. I'm a little scared now. Really. Because I swore yesterday that I took that meat out of the fridge and then laid it down to get the grill going.

I hope my pictures of spring springing puts a smile on your face.
TTFN
Kat
xoxox
Posted by Chain Stitch Crochet at 1:01 PM