I can't believe sometimes how time flies. I haven't posted since last week, I've been so busy, and trying to get over this sickness that is going around. I'm still not over it but I'm much better.

The weather is trying to get nicer. We've had little teases of spring here in GA. Monday it was gorgeous and warm. Yesterday the cold wind was back. They're saying that after tomorrow it will be in the 70's for a few days. Finally!!  I have noticed the last few days little snippets of spring popping up and out. There are some trees that are budding and I saw a yard with either crocus or daffodil bloomed out. (I'm bad about distinguishing the two - I guess if I had some I'd know huh?)

On the way home from work yesterday I saw some ducks and geese in a large pond/small lake that I pass by every day. I watch that pond/lake for those signs. Every fall they frequent it going south and opposite in the spring. It's actually 2 ponds/lakes that are joined together with some little islands of trees and bushes at the join. It's hard to describe, I should stop one day to take some pics to show you. I also saw some large woodpeckers with the large red thing on their heads. What is that called anyways?? They were very big woodpeckers. They weren't the American, with the red, white and black large bands. Their body was dark but they had that very red top notch (is that what it's called?) on the top of the head. I was walking to get the mail for work and the sun's rays showed through the one's red thing and it was gorgeous. There was a pair of them and one was larger than the other so I'm assuming it was a male and female. 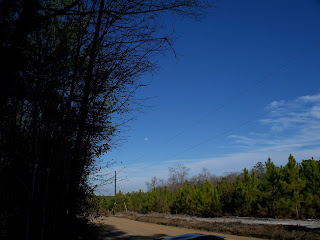 This is a pic of the moon when I was at the end of my driveway yesterday afternoon. I stopped on the way to the house when I got the mail and saw the moon and decided to get a pic of it. Isn't the blue in the pic beautiful? And no, that's not snow across the street in front of the pines. That is actually sand. The road is a brown sand, though it gets lighter in the summertime, and that in front of the pines is a white sugar sand. But anytime I see the moon I try to get a pic of it. I can never get a good close shot, so to speak, maybe because I don't have a big girl camera, only a little digital.

On my hooks currently is a couple of doilies. I'm still not through with the Rising Sun Doily but it will be done soon because my sister's birthday is the 28th and I want to finish it to send to her. She loves purple as I do. I started another one of Glor's doilies, I think it's the December doily of the month, and I am on the last round of it. It's made of #10 burgundy and about 4 rounds of #10 pink. I also started a pillow angel that the pattern was in one of the crochet emails I get in my personal email in box. That will most likely be for a friend of mine who's birthday is in June. I'm not sure what the pillow will look like yet, but I started her in #10 pink.

I was going to block my giraffe coaster last night but instead skyped with the grand babies. That's slated for tonight because I have to get it off in the mail Friday for my friend's birthday on the 22nd. 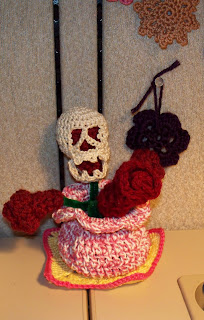 Skull roses you say? Well....yea. The rose was the only thing I could find to put my skull on to show it. It's part of my desk crochet eye candy. :o) Yea, I know, I'm weird. But isn't he soooo cute??? lol

Happy Hump Day! Hope yours is full of life and warmth!
TTFN
Kat
xoxox
Posted by Chain Stitch Crochet at 8:34 AM