I was thinking yesterday, those shots I took of the ponds? I took a close look and realized all the GARBAGE in the pics! So on the way home yesterday I really noticed just how much garbage is on the sides of the roads. It's horrible. They need to get those prisoners out there to pick up trash. The weather is nice so there's no excuse not to do it.

I tried to take another driving pic, only slowed way down because no one was behind me. I can see a couple dots that are ducks, there weren't that many there yesterday. It's still not a good pic. This pic has no garbage in it though. 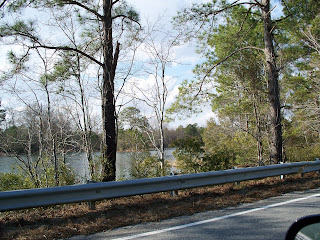 So after noticing all the garbage on the sides of the roads I thought I would take a couple of pics of garbage that people throw on my road. These pics are taken about a quarter mile down the road from me. I live in the country, and people that are not responsible take it upon themselves to just start their own dumps, on other peoples property. What do you see in these pics....other than the lovely pine trees and gas line cleared? 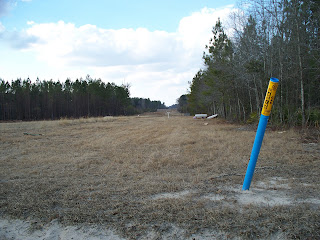 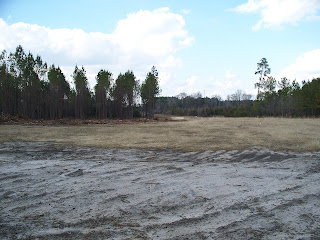 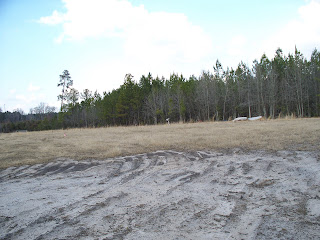 Wow......just down the road from my house is an outdoor motel and a drydock marina! Only thing is I've never seen anyone using either one.  Don't you know that this totally ticks me off. Where do they get off doing this crap? They're too damn lazy to take it to the dump so they just take a ride in the country and make their own. And I don't know about you but I don't throw my garbage out of my vehicle window. I guess I need to get down off the soapbox now because I can keep on going. I don't want to spoil your Friday!

I do want to show you something pretty. I was working on the Rising Sun Doily last night and realized that I should have changed over to the pink that I was originally going to do, about 1 round previously done. So I thought, well....I'll just make it all purple.  So I crocheted some more and realized, holy crap....I'm not going to have enough purple to finish this!!!

So I get up to get me another large cup of coffee and go on a little hunt into my closet, in my #10 thread container. I have green, red, blue, pastel. No more purple. Then...........wait..........what's this?? Ohhhhh, I forgot about this!! Last year in January I had ordered some DMC #8 Pearl threads. 3 different shades. Sometimes I'm a genious and I'm too dumb to realize it. But not genious enough because I should have ripped out the previous two rounds and was like, nope, no way. It'll have to do.

As usual, these pics do not do the colors justice. The #209 DMC is so shimmery. It's very pretty. But I'm kind of confused, because it says it's #8 thread but it's smaller than my #10 purple. What's up with that? Is there not a standard when it comes to that or does each company just do their own thing? I can't wait until it's done. I was going to incorporate all three colors on it but if I have enough of this 209 I won't. If I get close to the end and I see that I don't have enough to finish then I'll do the last two rounds in one of the others. But check it out: 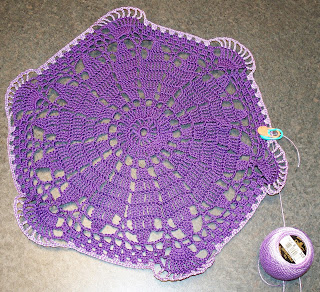 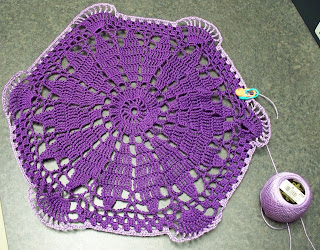 Whatya think? I think my sister is going to love it no matter what, for two reasons. The first is that it's from me and the second is that it's purple. That's all that matters right? :o)

Much love to you all! I hope you have an outstanding weekend and don't let anyone ruin it for you!!
TTFN
Kat
xoxox
Posted by Chain Stitch Crochet at 10:24 AM