Good morning! Today is St. Patrick's Day and is a big celebration day here in Savannah. I have not really partaken of the festivities of St. Patty's Day since I moved here. I'm not real big on crowds like that. There was one year where I had a fellow come visit me that wanted to go downtown to see what it was like. It was at night and that is one thing I will never do again. It was so crowded you couldn't walk, people (drunks) were sloshing their beer all over you, there were cops everywhere trying to keep the mayhem down to a dull roar. That's not my kind of thing. I'm not much of a drinker anyways so I have little tolerance for drunks and their 'shenanigans'. So I leave it to them and let them party down. I know our office will be a ghost town today for people taking off to partake. Tis ok. They can have at it.

Today also I am sending off some 6" squares for OnlineAngels. Three of the squares patterns came from Ms. SmoothFox. I hooked one square of the #4 and two of the #1 squares. The other two squares were ones that I had in my box that weren't of a 6" size so I finished them off to go with the other 3. The pinks & claret square started off as just the inside claret square. I added the two pinks and claret to it. I was surprised I did it and it stayed flat. Although it is a tad askew huh? I think that is due to my inside square being wonky before I even started. This was actually attached to the skein as I must have started it then dropped it for something else and never went back to it. Obviously I messed it up. :o(  And honestly, out of all the squares I like this one the best because of the colors.

The other square that was in my box is the claret lacy looking one with the orange border. The pic colors are crappy but when you see this square in person it kind of has a different color quality all it's own. I didn't like the two colors together at first but then it started to grow on me. So I left it the way it was. I've had worse color combo's together. :o)

I've also this week been working a little on the baby blanky, done a couple of Jen's hex's, started a lace glove in burgundy #10 (not sure how this is going to progress but I just had to try it), and last night I started this little alien amigurimi all on my own. You'll probably laugh when you see him/her. I think it's a she really. But I'll work on her some more tonight and try to post her tomorrow. 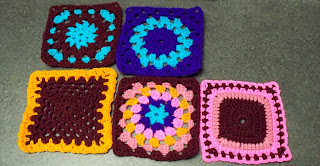 Nice mess of color huh? Just trying to bust some stash out. 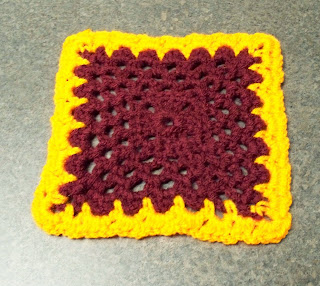 That orange sure is glaring isn't it??? Doesn't even look orange. 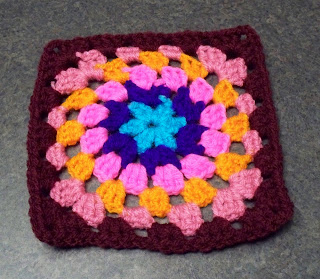 I thought this multi colored one was kinda pretty, although the orange kinda ruins the ambience. 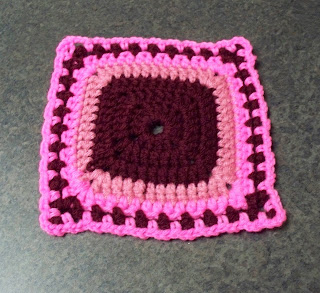 Even though this is wonky the colors draw me in. 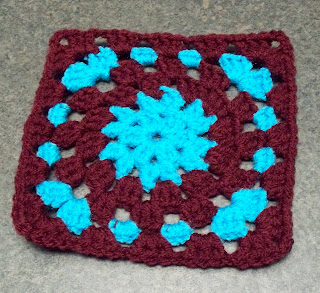 I made a hat of claret and turqua before. I think I have it somewhere but couldn't find it when I went to look for it. Anyhow, I like these two colors together. 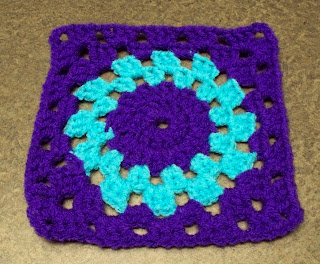 I think the purple and turqua go together too. Maybe a purse of these two colors? It is quite a bright color combo don't you think?

So off they go to a new home, probably several new homes. This somehow feels inadequate though.

I hope your St. Patty's Day is full of green, although the official color is blue! If you'll be out celebrating have fun and be careful.
TTFN
Kat
xoxox
Posted by Chain Stitch Crochet at 7:26 AM