Happy First Monday In The Time Change!!!! (Ohh it was hard to get up this morning)

I was on Ebay just a little bit ago searching crochet hooks. It seems that the little doo-hickey at the top of the hook is a pocket clip!  Who would have thought? I guess it could make sense. I don't carry mine around, I usually leave it with what ever it is that I'm crocheting at the time. But here is where I found it.  I put in a bid on these, although I know I won't get them. I was the current high bidder but getting ready to be outbid, or so the little message told me. I think Ebay is alot of bunk. You put in a bid and a little box comes up saying that you've been outbid. Now when I went to bid, the bid was quite a bit lower than what I bid, and I'm already outbid??? Hmmmm. I think they do that to drive up the prices. Anyways....the mystery of the little clip on the end of my vintage crochet hook is solved. It kind of makes me wonder why they don't still make them like that. Probably a cost cutting savings.

So, this weekend I worked on an outside project on Saturday. And I will probably not do it again. Unless I can figure a way out to make it easier. I didn't take pics yet because they are not dry and ready to take out of my molds, but I made this concoction for lightweight planters. I don't think my mixture was right. And my molds were a royal pain. I had quite a bit left over after filling my  molds so I dug a heart in the ground and molded a heart shaped planter. And then I still had some left over so I made a barrier (I can't think of a better word at the moment) that I can put dirt behind and plant something (the terrain it's on is a tad hilly). I'll have to take a pic to show you better what I can't say in words. :o(  There was only one planter that was somewhat dry yesterday, I think today when I get home I will be able to take it out of the mold. I don't think the rest of them will be ready.

Yesterday I crocheted a pinafore. No pattern, just hook and cotton flying. It took me most of the day between loads of laundry and going outside every so often to hang out with Mr. Lick Lick. He enjoyed yesterday so much. He could stroll outside whenever he wanted to and lay in the sun for a bit, then get up and come in and get a drink of water to quench his thirst. But I digress.

I am going to have to make another one or two and refine my pattern. The one I have finished is a bit wavy. I think too many decreases too quick is the culprit. And I made a mental list of little things to change. Like starting the straps right from the garment itself, instead of making them separate and trying to attach them. Plus I messed up the color sequence rows. It wasn't well thought out mind you, I just started it and went with what my hands did. :o) I am pleased with the overall result for my first one with no pattern. The next one or two I'll have to write it all down. This one and the others will be for my daughter, as she specifically asked for something like this from me. This first one is a bit different in colors. I went with what I had in my box that caught my eye. The dark color is supposed to be Peaches N Creme deep purple. It looks more like a deep blue than purple. I don't know the names of the other two colors, but the green is Peaches N Creme and the pink is Village Yarn cotton. And of course the lighting doesn't show the true colors. Looking at it in the pic I can see that I should have gone with yellow instead of the deep purple. Oh well. I think it's 'different'. :o) 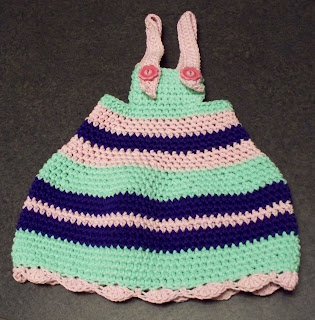 On to another subject that I kind of ranted about not too long ago. I came out of my driveway at o'dark thirty this morning headed to work. I went about 500 feet, if that, before my headlights picked up something large and weird in the middle of the road. I was sooooo p o'd. Someone took the carpet up out of their house and dumped it and carpet padding - a large truck load - smack dab in the middle of the road!!!!! WTH???!!  I barely had enough room to get around it. I was going to take a pic of it but I was so damn disgusted. I am sick of people using my road for a dumping ground. I thought about calling the cops but what are they going to do? Unless someone sits out there night after night waiting to catch someone dumping there's really nothing anyone can do. I hate it. Now it's to the point where they're just dumping it on the road. Not even on the side or up where the boat and beds and dressers are. UGH.......great way to tick me off first thing Monday morning, the first day of time change when I don't even want to get up out of bed. JERKS!!  I so wish I could have been there, I would have shot their tires out and called cops. This is just totally wrong for them to do that. Yea it would be wrong for me to shoot their tires but I wouldn't even be thinking that if they wouldn't dump their garbage BLATANTLY in the middle of the road.

I hope you were better able to get up this morning than me. Snuggling with Mr. Lick Lick was something I didn't want to leave. I had a hard time going to sleep last night. I bet I will crash and burn tonight.  :o(

Sign me 'not bright eyed and bushy tailed this morning'.
TTFN
Kat
xoxox
Posted by Chain Stitch Crochet at 8:12 AM