I have been so busy this week. I've been able to read pieces and parts, here and there, of the blogs I follow until this morning. It's been really slow today, which is fine, it's Friday after all. :o)

I've been kind of slow in the crochet department too. I did do Glor's Sugar Spun doily in green. I used #10 green thread and a #4 hook. It's a pretty little doily and went quick. I didn't block it. And it shows because it's hard to see the definition of the last rows on it. I love that color green. 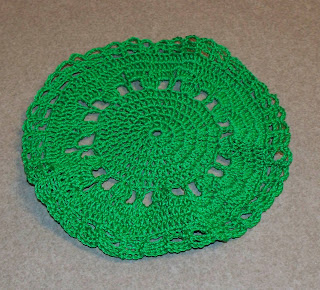 The other thing I finished this week was a hat that I just started with no pattern and ended up with a hat. I used the yarn (1 skein) that I had won in one of Paula's Birthday giveaways. I am keeping this hat for me.  I made it so that it goes down below my ears a ways, but I can roll it up too. It's pretty warm. I won't get to use it until the fall and winter but it'll be waiting for me. :o) 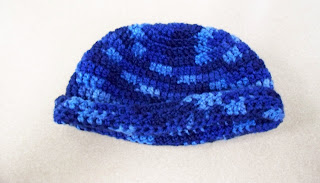 I cut my face off in this pic. I have gained so much weight since I quit smoking and it clearly shows on my face.  I have got to get rid of about 30 pounds. I need to go walking at night (before dark - too many scary critters to go after), the time change is upon us in another week. Leo will love that. When I grab his leash he knows it's time for a walk.

Oh...and the other wip I have been working on is the Baggy Cat for my daughter. The last pics I showed you were about where I stopped on her. I have all the parts done and last night I put the elastic in the bottom of her dress, two buttons on her shirt, and the eyes, mouth and nose on her face.  Now I just have her whiskers on the face to do and then put all the parts together and stuff them and put them on her. I just realized it's been a month since I laid her down and moved on to something else. I wish I wouldn't get bored with projects so quickly. Oh well. Hopefully I can show her to you Monday. She's been laying on my ottoman long enough, it's time for her to be done and packed away for Jen's birthday in October.

I still am working on Jen's tablecloth of tan and tangerine hexies, and haven't started on her pinafore towels that she asked for. I've also got quite a few of the peach and persimmon hexies done and started putting some of them together. So I have a lot going on but nothing done.

I get bored and find little stuff in between to break up the boredom. Plus my hands start hurting and I have to do something with a bigger hook to make them quit or take a break totally. I really want the big things to be done but things happen.

I just remembered that I have stuffed packed away, a bunch of different shades of purple granny squares for my sister's blanket. I think that's been over a year that I started that one. I love the colors but the harshness of the RH yarn gets to me and I get really tired of it quick. I should pull them out and put them in a see-through tote just to guilt myself. And if I made one or two a day I'd be done with them quick. Same as Jen's tablecloth hexies and the bigger hexies. One a day of each and I'd be done in 6 months with all three except for the joining.

Ok, I've jawed your ears off enuff. Have a great weekend in your little corner of the world!  Forget some of the seriousness that's going on the world right now for just a few minutes.Use some of those face muscles and smile and laugh like nobody's business. :o)
TTFN
Kat
xoxox
Posted by Chain Stitch Crochet at 2:14 PM