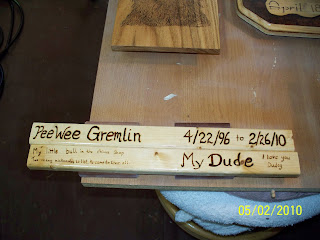 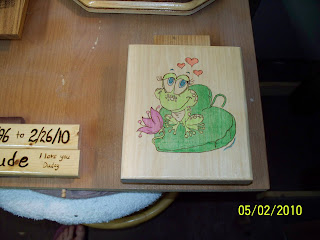 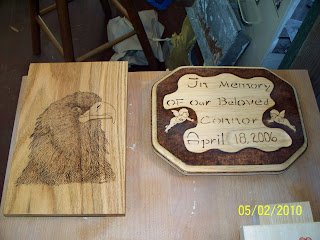 Yesterday I did laundry (yippee) and went to a wedding of a friend's son. I'm considered part of the family as I don't have any family close and I usually attend all of their family functions. It's wonderful that friends' families will accept you into their family like that. I think a lot of southern families are like that. Not to say that northern and western families aren't like that but for the most part southern are. It was a nice outside wedding and I'm glad I went.

I told my friend I would come over today and help her clean up, as her back has three bulging discs right now. So I was getting ready this morning (Mr. Lick Lick let me sleep til 8 this morning after getting up at 5 to let him go out to pee!) after I had half a cup of coffee in me, and she calls me. I didn't have to go because it wasn't that bad and Chuckie would help her tomorrow finish what needed to be done. And she invited me over to her nieces to help eat some of the leftovers of the wedding. I declined saying I didn't want to intrude too much on family stuff. She said I wasn't intruding, that I was part of the family. That made me feel pretty good.

I still didn't go. I feel so guilty on the weekends when I leave Mr. Lick Lick. The poor boy is in the cage all week while I work. I can't let my man of the house stay in the cage all weekend too. (How magnanimous of me huh?) LOL. He's all I have and the guilt weighs heavily on me when he has to go in there on the weekends. I don't have a choice during the week, I have to work. And I would love to be able to leave him out, I would feel a lot better, but I'll be damned if I'm going to come home every day after work and clean pee up. He pees cuz he's mad that he can't go and that I am leaving him alone. I don't know what to do to make him stop. He's 12. I'm pretty sure he did this to Jeff when Jeff was alive, though Jeff would never admit to it. Jeff would leave the a/c on and the back door open so that Leo could go outside during the day to pee. I asked him why he did that, that someone was going to come in and rip off his whole house. He said he did it for Leo and no one was going to come in the house unless Leo knew them. So anyways, Leo's done it to me and I'm not going to do as Jeff did, I can't afford to leave the a/c on and the door open. And a doggie door is out because he's a JRT (Jack Russell Terrier), he will dig out of the fence. It's too hot out in the summertime to leave him out in a confined area. Sorry, my dogs have been spoiled that way. If it's too hot out for me, it's too hot out for them.

Well I think Leo has napped at my feet long enough. It's time to go out and put another coat of finish on my latest woodburnings. 3 are gifts - Kay's is the froggy,
Chuckie's is the eagle, my daughter's is the other and of course PeeWee's cross that I need to finish. My daughter's is for mother's day, Kay and Chuckie's birthdays are next month.

Here's to a stress free Monday at work even though I will be working my tail off. :o) I don't think I have ever liked a Monday before but I will be loving this one.
TTFN
Kat xoxox
Posted by Chain Stitch Crochet at 2:27 PM