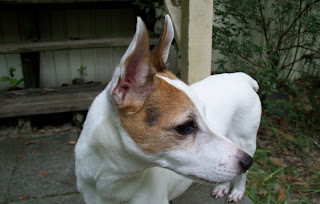 Phew...made it to Monday. Now if the rest of week will go by quickly. I have a 3 day weekend coming up!!

So you must be wondering about the title. WELLLLL....my Mr. Lick Lick scared the crud out of me Saturday. It was late Saturday afternoon to be exact. He went outside about 3ish. There have been these three armadillo babies that are living underneath my shed, and they decided Saturday afternoon to go exploring for food. Normally armadilly's (as I call them)come out at night, not during the heat of the day. What were these babies thinking??? I know they are babies because they are still pink, they are not totally brownish/grayish yet. And there are three of them. Did I already tell you that they are born 4 to a litter and that all 4 are the same sex? Isn't that odd? Well anyways - I don't know where their mother is, she is clearly slacking on her motherly duties, I don't know what happened to the fourth baby. But they obviously are day-owls. LOL.

SOOO...I let Mr. Lick Lick out and he goes nuts. They are taunting him so badly, because they know he can't get to them. They are on the outside of the yard fence. And nuts is putting it mildly as to how he acts. Well gosh...he's a JRT after all. That is their nature, to hunt. And to have a fence in between him and his quarry does not make him happy.

I left him out there for a while - he was amused and I thought 'what harm could it do?' Well I'm here to tell you - bad thought on my part. I am a bad mama. He drove himself in such a frenzy that he was back and forth along the fence. It was probably close to a half hour or so. I could hear him barking so I knew he was ok. Or so I thought. Well the armadilly's wound up out back searching for bugs and whatnot in the soil and he was going back and forth along the fence. I decided to go out and watch them for a bit. Leo is still going at it. He doesn't pay me a bit of mind. And he looks fine, except he's in his frenzied JRT state of mind, one track mind. So I decide that's enough of his barking, he's had quite enough fun already.

On one of his passes I have to scoop him up to get him and he's so hot! His body is burning up!He is breathing sooo hard. Well in he's going with me and to the water bowl. I get him in the house, put him down on the floor and he collapses!! Now who's in a frenzy??? MEEEEE. I pick him up, take him to the water bowl and he lays on the floor drinking water, just lapping it up. He tries several times to stand up but his back legs splay out and he collapses. I am freaking out by this time. Kicking myself and all that stuff (cussing myself out), for leaving him outside to what I thought was having fun for him. After a whole big bowl of water I made him stop drinking and picked him up and brought him to the couch with me. He cannot stand up. It's late in the afternoon - the vet is closed. If I have to I'll call and meet them there but I want to wait until he's cooled off and rested to see how he is. The whole time I am worried sick. I have no idea what is wrong with him and of course the whole gamut of stuff goes through my head - heat stroke, drank his water too quick and it's affecting his body, he's done something to his legs. But he was fine running the fence line until I picked him up and brought him in...so what in the world can be wrong with him???

Well I made him lay next to me on the couch and cool off. He took a short nap but could not stand up. After a couple of hours I picked him up and put him on the floor. He could stand up briefly and would sit down. Then he'd get back up briefly and sit back down. Slowly but surely he got to where he could stand up and walk more and more each time he tried.

I'm breathing a little easier by this time and think that maybe after a night of rest and sleep he will be better. Which he was better. But he still was somewhat slow, and had a little bit of hard time jumping up on the couch.

I'm convinced that he hurt himself by over-exertion. He's 12 years old now, and he's not used to that much running. And with their one track minds, the only thing he was thinking about were those dang armadilly's.

Sunday he was very slow for the first half of the day, and didn't even look out there to the shed. He pee'd squatting once, instead of lifting his leg. I think he was hurting. I told him that we are both getting older and there are things we cannot do anymore. Like he listened to me right??? :o) By the late afternoon he was almost back to normal and this morning he was fine.

Ya know what??? No more armadillys for Mr. Lick Lick. Sorry...Leo can't have fun with them anymore. He's getting too old and doesn't think about himself and what harm he's doing to himself. He knew how frenzied I was about him. He'd look up at me like what's wrong with me mom, I'll be ok mom? I am soooooo glad that I scooped him up when I did. I hate to think what would have happened had I left him out there and gone back in the house.

He knew yesterday morning that he didn't want anymore armadilly's. He actually got in the car with me while I was cleaning it out and vaccuuming it. He HATES the vaccuum. Do you know he actually laid on the back seat while I vaccuumed up the back floor and the seat?? I knew how wiped out he was when he didn't move for the vaccuum. And he got up on the back ledge in the back window. He reminded me of those little bobbin' head dogs. LOL...except he was a tad bigger. 13 pounds bigger.

What am I going to do with my little dog-man?? My little armadilly hunter. Lesson learned: Armadilly's are not worth the life of my fur baby. Gotta get those dang things gone. They need to find a new home. End of story.

Is it Friday yet??? I hope your day is wonderful in your spot in the world!
TTFN
Kat xoxox
Posted by Chain Stitch Crochet at 2:14 PM