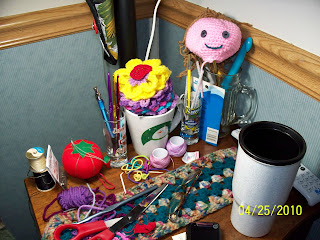 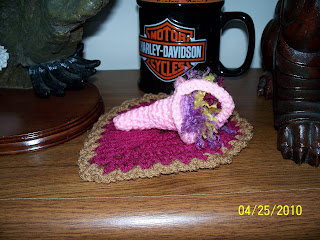 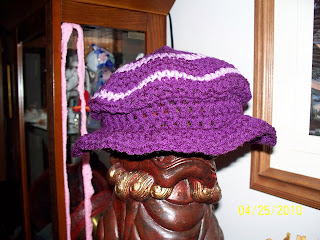 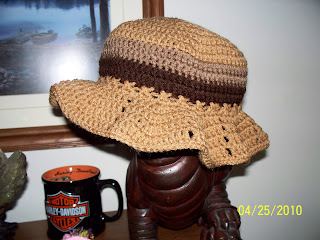 Is that how you spell melancholy? It just doesn't look right does it?

Oh well...anyways....how was your weekend? Very good I hope. Mine was spent on the couch. Between my back and the rain, the couch was my spot. I had the weather channel on all weekend. Geez louise....those poor people in Mississippi huh? I was watching it when Dr. Forbes said he had a sick feeling in the pit of his stomach because he saw debris turn up on the radar when a tornado was tearing apart Yazoo City. And then it came to pass and those poor people...I felt so bad for them. I could not imagine. Some lost their lives. One in Mississippi was a 3 month old baby. How horrible. The poor defenseless little one didn't have a chance. I don't know the particulars but it's a sad thing.

Sooo....I made a few things this weekend. Two of which were hats. A purple one and a brown one. The purple one was from a pattern that I had printed out but it didn't have a url on the page of where I got it from. It had an error in it and I got disgusted and just finished it how I wanted.

The brown one was a Sun Hat from the Fave Crafts web site. It worked out perfect to the last round. I was very pleased with it. The only thing was that the last round called for a reverse sc and I don't know how to do that so I just left it off. It was ok because by the time I got to that point I was ready to be done and quit for the day. My back was killin me, my stomach was not feeling good. But my hat was done and so pretty. I used different yarn, the pattern called for cotton. I used Warm Brown, 2 rows of Cafe and 2 rows of Coffee Red Heart Med. Worsted #4.

I have fretted over how to put my heart and shells motifs together. Saturday I took a go at it and ended up putting them up and out of sight. I am so bummed. The only way I can think to put them together came to me while sitting there yesterday making the brown hat. I guess I am going to have to make full squares and attach them to the squares and then join the squares. So much more work. I thought I had it all worked out but when I actually started putting them together I got so frustrated because nothing I tried worked. When I get frustrated I just put up whatever it is that is giving me fits and try it again another day when I am fresh.

I have to 'digress' here. :o) I forgot to tell you how my Thursday and Friday went. Thursday was great! I met my family and we went downtown to do the touristy thing. We rode an open air trolley to the second stop and got off. My niece wanted to see the Mercer House. That was her main thing to see while here. So she and her youngest daughter took the tour inside while the rest of us went to the square across the street from the front of the house and sat on a bench waiting for them to get done. It was ok. The two other nieces read their books and my sister and I chatted and caught up on stuff. While we were sitting there the cutest little Yorkie came around the corner with her human and other doggie sibling. She was sooooooo cute. I ooooohed the moment I saw her round the bend and of course had to make a fuss over her. Come to find out she was 10 and just as spunky as could be. So they went on and my niece and grand niece got done with their tour. It was close to lunch by this time so we went to Mellow Mushroom and pigged out. Everybody enjoyed lunch, it was good. So then we went to a t-shirt/shirt store on the corner that everyone had looked in the window of earlier. My sister bought a shirt made by the same people as the one I had on. Mine was originally $60 but it was gift from my boss. My sister bought a blue one with butterflys and flowers on and paid $69 for hers. The others bought shirts/whatnots. I was the only that didn't get something. Tis ok...I have plenty of shirts at the hacienda. So we finished out the tour and got back to the van about 3ish. My niece about killed us when she ran a red light...what does she know...she's from NY. LOL. I'm kidding...she's a pretty smart cookie, she's just not from here. My sister and I about had a fit though. We were so glad no one was coming! That's all we would have needed was to get in a wreck. Them especially being so far from home. So they took me back to my car and we took a group pic and hugged and they went back to Hilton Head and I went home. It was a wonderful day with family.

Friday I went to the doc. He gave me pain meds, wants me to see a neurologist. The thing is that my old doc has not given up my records yet. It's been 6 months since I requested them! Guess I'm going to have to be a b*#$%! That bites! He can't do anything until he sees my previous MRI. Anyways...I went to wallyworld (Walmart)and they had a pink and brown craft bag on sale for $5 that used to be $11 that I can put my yarn and all kinds of stuff in it and carry it where ever I go. I was ecstatic about that. I have been using the regular walmart bags. I also went to see my friend that I hadn't seen too much of lately. Her back is out too! That's what happens to those of us who have always been physical all of our lives and when we get older our bodies rebel. Most of my jobs my whole life have been physical. She has always worked out in the yard and done all kinds of physical activities. So I visited with her for a while then came home to spend the rest of the weekend with Mr. Lick Lick.

My spoiled rotten Mr. Lick Lick. I love him so much. He makes me laugh. He's almost human you know. LOL...at least so he thinks. He loves it when I am home. He was not a happy camper this morning when I had to leave for work. The look on his face about killed me. But I have no choice. If we want to eat and have a roof over our head, I have to work.

As to my pics up top...the first two are my hats that I crocheted this weekend. What do you think of my flower basket? I was thinking that I should have taken a pic of the top of it for you to see. I think it's cute. And lastly is my little corner, where it all happens. See my little smiling head there? One of these days I will finish her. I think her head is too big, but then again that means that her bod will have to be to size so she doesn't look like 'big head' huh? LOL

Anyways...ramble time is over. :o) I hope where ever you may be that the sun is shining and your day meets or exceeds your expectations! If not then there is always tomorrow right? :o)
TTFN
Kat xoxoxo
Posted by Chain Stitch Crochet at 1:06 PM