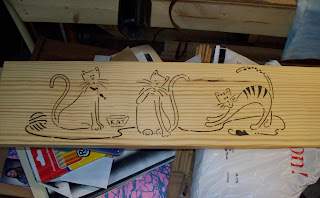 Is it Monday again?? Already??? Holy cow...life goes by so quick, does it not?

How was your weekend? Mine was spent mostly at home. I did go to Wally World (Walmart) Saturday morning. I hate going there. I always spend way more than what I had planned when I walked in. Forget lists......I can't stick to them. And I forgot one thing..it wasn't on my list. At least not on THAT list. I didn't remember until I got home and was putting things up. Then I remembered that I had put it on the list, just not THAT list. Geeze......where did my original list go to anyways? I can't find the stupid thing.

So anyways...the rest of the weekend was spent either on the couch crocheting or outside. I did manage to rake the back yard and then burn the leaves, and wash the car!! I did piddle a little with plants and such, but my back was killing me so I didn't get a lot accomplished. The raking and burning and washing made me even worse but these were things that I needed to get done. Especially the raking and burning before it gets too hot out to do that. It was a beautiful spring weekend to do that too.

Mr. Lick Lick got in trouble. Oh I wish I'd had my camera with me. I was out back watching the fire when I hear a succession of 'stuff hitting the floor' of the shed. On the third sound I went to the shed. Do you know that that little joker had jumped up one of my shelves (about 3.5 to 4 ft off the floor)and knocked down stuff! Oh I was mad. It's not bad enough that he has to climb through and over everything on the floor but now he's climbing! I promptly got him down and closed the shed door so he couldn't go back in there. He was probably saying 'gee mom, I was just having a bit of fun, I wasn't hurting anything! I didn't break anything!' :o) No but mom had to clean up the mess not Mr. Lick Lick. So he was banned from the shed for a while. I think it about killed him too cuz now he had nothing exciting to do but sniff the yard. You can sniff the yard only so many times.......lol. So he found a nice sunny spot and laid down and took a nap.

I have been working on some heart motifs that are quite large in size. I'm thinking they are about 9"??? I think I mentioned them in an earlier post. It is part of the 12" Hearts and Shells square by Sherry Welch on the HeartMade Blessings site. After fixing the mistakes, I am so taken with this pattern, because I have been looking for a good heart pattern, and this one is a really nice one that the heart actually looks like a heart and not all lopsided. They are easy to pump out and I want to try to put them together for lapghans and afghans. I have been using different color combinations and some of them I just love. I was going to make my younger sister a ripple afghan but I have re-thought that idea and will now use these motifs. I am addicted to them. I just have to figure out how to put them together. I think I have it worked out in my head so we shall see when I get enough done to make a lapghan.

Where ever you are I hope you're having a wonderful day!
TTFN
Kat xoxox

PS/another one of my burnings. I think I want to make another one of these. Even though it looks easy it was not. Mostly I think because I used pine. I should have used a better wood.
Posted by Chain Stitch Crochet at 11:35 AM