Things happen for a reason 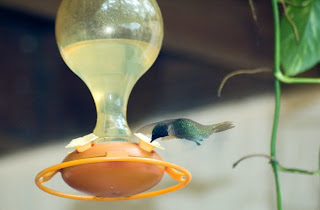 Ahhh yes...Friday Eve. The only thing better is Friday itself! :o)

I have searched my whole computer and searched in all the wrong places. I was looking for a pic I KNEW I had of one of my hummingbirds. If I had done a search to begin with I would have saved myself a lot of time and aggravation. But I am a very firm believer that things do happen for a reason. Why...we may and probably will never know. But as I was searching for this elusive pic I found pics of my best friend that passed away - Mr. Lick Lick's daddy, J. It's not so long ago that he left us and that hole in my heart is still so huge. Tears are at the edges right now, wishing he was not gone. I'd give Mr. Lick Lick up right now and be alone, if his daddy were to walk through the door. Though I know that won't happen.

If you have a best friend, cherish them with all your very being. Let them know how much they mean to you. I, sadly, did not do this with J, as it was an unspoken thing between us. He was, after all, a MAN. Men don't cry, men don't let their real feelings be known. We had this discussion many times. And I am kicking myself in the ass now because I had all of those opportunities to tell him exactly how I felt about him and I didn't. For that, I feel really bad, and it's all on my part because I hope he knows how I feel, felt. As far as I am concerned his MAN feelings are hogwash, rubbish, bullcrap.....whatever you want to call it. Or I should say were huh......I'm still kicking myself. The hole sits on a big ol' mound of guilt.

He left us so suddenly. Poor Mr. Lick Lick was there in the house with him that day and was, I'm sure, severely traumatized by the whole ordeal. He was there with him at least 6 hours before anyone found J. And all he knew was one minute his daddy was there, the next he would not respond to him, and he was all alone and then whisked out of the house to someone else's house for a day only to be returned to the same house he'd lived in his whole life with his daddy and now his daddy was gone. There were friends and strangers coming in and out of the house, his house, his home, for almost a whole week before he left on this trip in the middle of the night to some strange place with his dad's best friend and his biological daddy (PeeWee). And now he was to be a country dog, no longer a city dog, leaving the only home he'd ever known.

This was a very hard thing for me. I struggled with it and still do to this day every time I look at Leo...I wish his daddy was here. I miss him so much. They say things happen for a reason. I guess so but fail to understand why, even though I'm a firm believer in that statement. I went home to FL for a few days this last Christmas, and stayed in J's house while there. Why you say? (Everyone I knew asked that very same thing) Wellll...I don't know if I can explain it so that you can understand. I felt like it was something I had to do, it had to be 'right in my face' because I still could not believe that he was gone. At that point, J had been gone a little over a year. His family had taken most of his possessions out of the house. The garage, which the contents were left to two of his other male friends, was still intact - with the exception of the brand new washer and dryer J had purchased half a year before he suddenly left. In the fridge were a few items. One that struck me down was an Orange Crush, with a piece of blue tape that had J's name on it. This was one of his favorite drinks. I cried buckets of tears while there. It was not the same. I know now and knew while I was there that that would be the last time I would step foot in that house. It's not J's anymore, he's gone. His stuff is gone, Leo is gone, Leo is with me. And I love that little booger so much. If J hadn't left him to me I would have fought tooth and nail for him. He's all I have left of J.

Things happen for a reason.

I hope your day is wonderful.
TTFN
Kat xoxox
Posted by Chain Stitch Crochet at 9:52 AM